Narragansett is a town in Washington County, Rhode Island, United States. The population was 14,532 at the 2020 census. However, during the summer months the town's population more than doubles to near 34,000. The town is colloquially known as "Gansett". The town of Narragansett occupies a narrow strip of land running along the eastern bank of the Pettaquamscutt River to the shore of Narragansett Bay. It was separated from South Kingstown in 1888 and incorporated as a town in 1901.

There were 6,846 households, out of which 22.0% had children under the age of 18 living with them, 44.6% were married couples living together, 8.7% had a female householder with no husband present, and 43.8% were non-families. Of all households 27.2% were made up of individuals, and 9.0% had someone living alone who was 65 years of age or older. The average household size was 2.38 and the average family size was 2.86.

The median income for a household in the town was $50,363, and the median income for a family was $67,571. Males had a median income of $45,436 versus $31,759 for females. The per capita income for the town was $28,194. About 4.9% of families and 16.0% of the population were below the poverty line, including 8.4% of those under age 18 and 5.0% of those age 65 or over. In 2010, Narragansett was estimated to have 2,743 people in poverty; college students represented 71% of that group, and in comparison, statewide college students make up only 13.7 percent of the total population in poverty. This large college factor, in a relatively small community has a profound impact on the overall poverty rate.

From September through May the town is home to many students from the University of Rhode Island located in nearby Kingston. 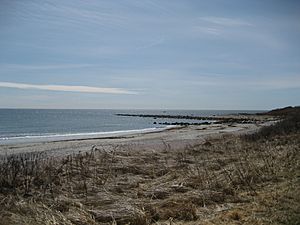 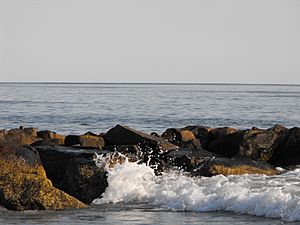 Waves crashing on a rock in the Atlantic Ocean, visible from the Seawall of Narragansett.

Narragansett is known for its summer recreation and beaches. Fishermen's Memorial State Park, located near Galilee, contains a former military fort (Fort Greene) and a campground.

Three beaches in Narragansett that are most famous are: 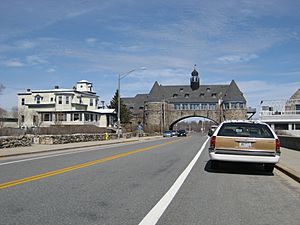 The Towers, which pass over Ocean Road along Rhode Island Sound, is Narragansett's most famous landmark.

Thirteen different buildings and districts in Narragansett are listed on the National Register of Historic Places:

According to Narragansett's 2012 Comprehensive Annual Financial Report, the top employers in the city are:

All content from Kiddle encyclopedia articles (including the article images and facts) can be freely used under Attribution-ShareAlike license, unless stated otherwise. Cite this article:
Narragansett, Rhode Island Facts for Kids. Kiddle Encyclopedia.