Washington County, known locally as South County, is a county located in the U.S. state of Rhode Island. As of the 2020 census, the population was 129,839. Rhode Island counties have no governmental functions other than as court administrative and sheriff corrections boundaries, which are part of the state government.

At the earliest stage of colonial settlement, the area was called "The Narragansett Country", named after the Algonquin tribe of the same name and its tributary tribe the (Eastern) Niantics, whose territory it was, and these held power in the area long after the Wampanoags to the east had lost most of their territory to the Plymouth Colony. (The Algonquin Nipmucs may have held a piece of what is today the westernmost part of the town of Hopkinton.)

Early land purchases in the Narragansett Country were effected by Dutch and English settlers after the establishment of Indian trading posts at Fort Neck, today's town of Charlestown by the Dutch, and at "Smith's Castle", Cocumcussoc, now Wickford, in today's North Kingstown, and these were most notably the so-called "Atherton Purchases" North Kingstown, Quidnesset, and of the Boston Neck area of Narragansett; and the somewhat-conflicting "Pettaquamscutt Purchase" of the rest of North and South Kingstown, Narragansett, and parts of Exeter. Subsequent purchases including the "Misquamicut Purchase" brought in area now part of Richmond, Hopkinton and Westerly. A series of conflicts involving the Manisseans on Block Island gave that island to the Massachusetts Bay Colony for a number of years, before being transferred to the Rhode Island Colony under Newport County, and then finally to Washington County in 1959.

Holding claims to "South County" from the beginning of the Colonial period were two sovereign nations, the Netherlands and Great Britain, and no less than four colonies: Connecticut Colony, the Massachusetts Bay Colony, Plymouth Colony, and Rhode Island Colony. Since the Narragansetts had pledged their fealty to King Charles, the area was styled "The King's Province", and was placed under the authority of Rhode Island "until the King's pleasure was further known". In 1664 a royal commission under Charles II stepped in to adjudicate these conflicting land claims over the so-called Narragansett Country. The commission extinguished the claims of Massachusetts, and Rhode Island was granted jurisdiction until the commission finished processing Connecticut's appeals, which were not ended until 1726. Settlements of King's Province were named to reflect the English Restoration, in honor of King Charles II. Modern towns reflecting this history include the two Kingstowns and Charlestown, as well as the villages of Kingston and West Kingston. Washington County had been named "King's County" until the American Revolution, when it was renamed after George Washington.

According to the U.S. Census Bureau, the county has a total area of 563 square miles (1,460 km2), of which 329 square miles (850 km2) is land and 234 square miles (610 km2) (41%) is water. It is the largest county in Rhode Island by total area and the smallest county in the US that is a state's largest county. The county's topography ranges from flat along the shoreline to gently rolling hills further inland. The highest point is a large area approximately 560 feet (171 m) in the Exeter neighborhood of Black Plain; the lowest point is sea level along the coast. The northern boundary, west of Davisville, is approximately 41.60°N. The western boundary, north of Westerly, is approximately -71.79°W. It is the least-densely populated county in Rhode Island. 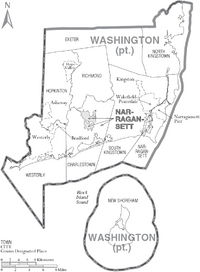 All content from Kiddle encyclopedia articles (including the article images and facts) can be freely used under Attribution-ShareAlike license, unless stated otherwise. Cite this article:
Washington County, Rhode Island Facts for Kids. Kiddle Encyclopedia.