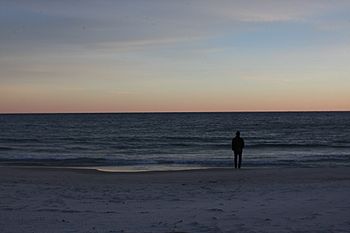 Weekapaug is a small fire district in southern Washington County, Rhode Island, United States. It is part of the town of Westerly, Rhode Island, and is a small beachfront community that is also a census-designated place. Weekapaug lies in the Eastern Time Zone and observes daylight saving time.

Weekapaug has many private roads running through it and isn't as well known as neighboring Watch Hill, Rhode Island. It has had summer cottages since 1877. Weekapaug was known as Noyes Beach from 1701 to 1899. It was named after Reverend James Noyes who had purchased 300 acres (1.2 km2) of what was to become Weekapaug. Weekapaug is a Native American word meaning "end of pond". Niantics, Pequots, and Narrangansetts lived in this area before early settlers arrived.

In 1899, Frederick and Phebe Buffum opened the Weekapaug Inn for a first summer season of guests.

On September 21, 1938, The Hurricane of 1938 swept the barrier beach clean of houses and irreparably damaged the Weekapaug Inn. See Fredrick C. Buffum's first hand account. The Weekapaug Inn was rebuilt and reopened for guests in June 1939. 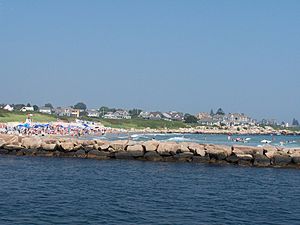 The song "Weekapaug Groove" by the band Phish is named after the area. The song does not appear on any of their studio albums, but does appear on many of their live albums, such as Slip Stitch and Pass.

All content from Kiddle encyclopedia articles (including the article images and facts) can be freely used under Attribution-ShareAlike license, unless stated otherwise. Cite this article:
Weekapaug, Rhode Island Facts for Kids. Kiddle Encyclopedia.