Westerly is a town on the southwestern shoreline of Washington County, Rhode Island, United States founded in 1669 by John Babcock. It is a beachfront community on the south shore of the state. The population was 22,787 at the 2010 census. The town is part of the Norwich–New London, Connecticut New England city and town area.

On the western border of Westerly flows the Pawcatuck River, once renowned for its own species of Westerly salmon, three of which are on the town's crest. The river flows from some fifteen miles (24 km) inland, emptying into Little Narragansett Bay. It also serves as the boundary between Westerly and Pawcatuck, Connecticut. Along the coast of Westerly lie salt ponds which serve as shallow reeflike pools whose outer walls form the long, white beaches for which the town became renowned. From west to east, these ponds are called Maschaug Pond, Winnapaug Pond, and Quonochontaug Pond. The town also has the fresh water lake Chapman's Pond which is undergoing revitalization. A type of granite known as Westerly granite has long been quarried here. Westerly granite is ideal for statuary and has been used in numerous government buildings of several states along the eastern seaboard. The Westerly area was known for its granite and stone-cutting industry.

Westerly's primary industries today are textiles and tourism, but the town was historically famous for its granite, quarried in at least two locations in Westerly, in Bradford, and in Potter Hill.

Westerly was probably named for the settlement's location respective to Rhode Island's geography, being the westernmost town in the state. But there is also a possibility that the town got its name from the English village of Westerleigh, in the county of Gloucestershire. The English village was the home of one of Westerly's founding fathers Elder John Crandall (ca. 1612-1676). Elder John settled in Westerly in 1661, and the early history of Westerly contains many references to him and his sons.

Due to its location, Westerly is vulnerable to tropical storms and hurricanes. Westerly was devastated in 1938, 1944, and 1954 by several major hurricanes. In 2012, Superstorm Sandy left beaches along the Westerly shoreline devastated and nearly unrecognizable, including Misquamicut. Rhode Island Governor Lincoln Chafee stated that Misquamicut was "our New Jersey," referring to the amount of damage that was received in the state of New Jersey.

Westerly sits atop a glacial moraine, a series of small hills of debris left behind by receding glaciers in the last Ice Age. A pristine sample of the moraine encompasses a 140-acre (0.57 km2) preserve owned in perpetuity by the Westerly Land Trust. Within the trust land are the rare "kettle" formations that extend out under the sea to Block Island.

Westerly consists of a number of small villages. Downtown Westerly on the Pawcatuck River is the municipal seat of the area, with the old town post office, library, YMCA, railroad station, former police headquarters (which is now located on Airport Road), granite buildings, and Wilcox Park. 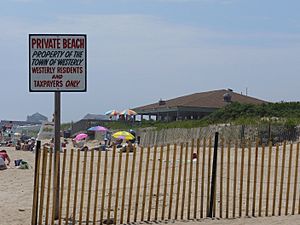 Other villages include Avondale (with antique colonial-style and Queen Anne-style homes), Bradford (with its own post office and postal code), Dunn's Corners, Mastuxet, Misquamicut (a beachfront community with small amounts of nightlife and several hotels), Potter Hill (where the Town Forest is located), Shelter Harbor, Watch Hill (with its beaches and summer cottages), Weekapaug, White Rock, and Winnapaug (with its public golf courses). West'lyans normally identify themselves with the town, as opposed to the village in which they reside, except for Bradford, Shelter Harbor, Watch Hill, Weekapaug and White Rock.

The town holds a number of annual events such as the Pawcatuck River Duck Race in April, Virtu Art Festival in May, Shakespeare in the Park and The Summer Pops (hosted by the Chorus of Westerly) in June, and Riverglow in July. In recent years, the Westerly-Pawcatuck Chamber of Commerce's events have attracted many visitors, including Big Screen Movies on the Beach through July and August, Westerly's Columbus Day Parade in October, and several beachfront events.

The former granite mining and the stone-cutting industry is historically important. Its quarries produced blue granite, in addition to pinks and reds. The Smith Granite Company employed many granite cutting craftsmen and was one of the town's major employers until the quarries stopped operating in the 1950s. Hundreds of examples of their work can be seen in the battlefields of Gettysburg and in city squares, municipal buildings, cemeteries throughout the United States, and even the Georgia State Capitol.

The Guild Guitar Company was founded in 1952 by Alfred Dronge in New York City. They moved production to Westerly in 1967 and continued to make their well respected archtop, acoustic, and solid body guitars there until 1996, when they were bought by Fender Musical Instruments and production was moved to Corona, California.

A number of figures from the history of sports were residents of Westerly. Former major league baseball manager (Philadelphia) Eddie Sawyer is from Westerly, as is former Washington Senators pitcher Dave Stenhouse. Frankie Frisch, player-manager of the St. Louis Cardinals' famous "Gashouse Gang," retired to and lived the remainder of his life in Westerly, and Elisson "Tarzan" Brown is from the Westerly area, one of the finest marathon runners in the world. Another famous resident is country pop singer Taylor Swift who maintains a beachfront estate in the Watch Hill area. 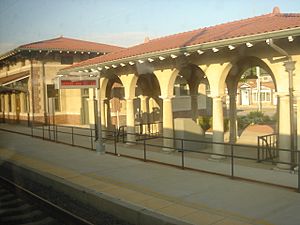 There were 9,402 households out of which 29.7% had children under the age of 18 living with them, 50.2% were married couples living together, 11.0% had a female householder with no husband present, and 34.8% were non-families. 29.0% of all households were made up of individuals and 12.5% had someone living alone who was 65 years of age or older. The average household size was 2.40 and the average family size was 2.98.

The most frequent ancestries among the town's population are Italian (34.2%), Irish (17.9%) and English (14.2%). Many Italians moved to Westerly from Italy around the start of the 20th century (particularly from Sicily and Calabria), and Italian dialects are still spoken at the homes of many older residents.

Washington Trust Bancorp Inc., a publicly traded regional bank with operations in Rhode Island and Connecticut, is headquartered in Westerly.

All content from Kiddle encyclopedia articles (including the article images and facts) can be freely used under Attribution-ShareAlike license, unless stated otherwise. Cite this article:
Westerly, Rhode Island Facts for Kids. Kiddle Encyclopedia.