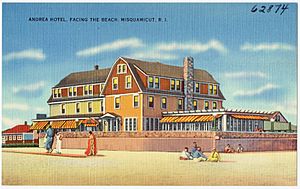 Misquamicut is a small beachfront community and fire district in southern Washington County, Rhode Island. It is part of the town of Westerly and is a census-designated place. The population was listed as 390 in 2010. Misquamicut lies in the Eastern Time Zone and observes daylight saving time.

The district was once known as Pleasant View. The land was purchased from Chief Sosoa of the Montauks in 1661. The name was changed from Pleasant View to Misquamicut in 1928. Misquamicut is an Algonquian word for "red fish." The area suffered a series of devastating hurricanes that wiped out beach homes, hotels, and other structures in 1938, 1944, and 1954. A portion of the oceanfront became Misquamicut State Beach in 1959.

All content from Kiddle encyclopedia articles (including the article images and facts) can be freely used under Attribution-ShareAlike license, unless stated otherwise. Cite this article:
Misquamicut, Rhode Island Facts for Kids. Kiddle Encyclopedia.