Hopkinton is a town in Washington County, Rhode Island, United States. The population was 8,188 at the 2010 census. 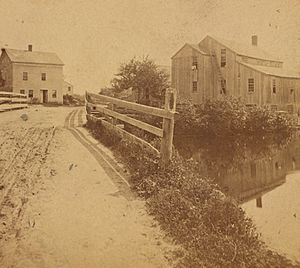 Hopkinton is named after Stephen Hopkins, a signer of the Declaration of Independence who was Governor of the Colony of Rhode Island and Providence Plantations when the town was partitioned from Westerly and incorporated in 1757. Hopkinton once featured a number of industrial villages, such as Locustville, Moscow, Centerville, and Wood River Iron Works, each being named after the mill which they surrounded. Today only Hope Valley, Rockville, Ashaway, and Bradford are recognized with a post office. A section of the town has its own post office known as simply "Hopkinton." The town hall is located in the village of Hopkinton City, which was once a major stagecoach hub..

Hopkinton is found at 41.461 N latitude and 71.778 W longitude and borders Richmond and Charlestown. It is on the Pawcatuck River on the Connecticut border.

Hopkinton is the southernmost town along Rhode Island's portion of Interstate 95; as such it is the first Rhode Island town that northbound travelers encounter.

In Hopkinton, the two primary villages are Hope Valley in the north and Ashaway in the south. Two of the four elementary schools in the Chariho Regional School District are located in Hopkinton: one in Hope Valley and one in Ashaway. Other villages that are located (or partially located) in Hopkinton include Barberville, Bethel, Bradford, Burdickville, Canonchet, Centerville, Hopkinton City, Locustville, Moscow, Rockville, South Hopkinton, Woodville and Yawgoog. Almost all of these villages formed from mills on rivers. Some villages dominate others when it comes to postal addresses, home identification and where to attend school. As before mentioned, the two most dominant villages are Hope Valley and Ashaway, which have extended their borders as census-designated places into other less-known villages.

There were 2,965 households out of which 35.2% had children under the age of 18 living with them, 61.9% were married couples living together, 7.7% had a female householder with no husband present, and 26.4% were non-families. 21.0% of all households were made up of individuals and 9.4% had someone living alone who was 65 years of age or older. The average household size was 2.64 and the average family size was 3.07.

Students in Hopkinton are part of the Chariho Regional School District. 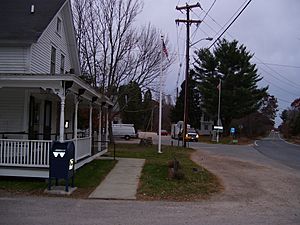 All content from Kiddle encyclopedia articles (including the article images and facts) can be freely used under Attribution-ShareAlike license, unless stated otherwise. Cite this article:
Hopkinton, Rhode Island Facts for Kids. Kiddle Encyclopedia.