Yawgoog Scout Reservation (Camp Yawgoog) is a 1,800-acre (7 km2) reservation for Scouting located in Rockville, Rhode Island and operated by the Narragansett Council of the Boy Scouts of America. Founded in 1916, Yawgoog is the fourth oldest continuously run Scout camp in the United States. 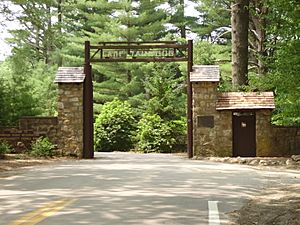 The main entrance to Camp Yawgoog 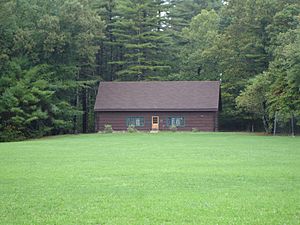 In 1916 Scout Executive Donald North, after inspecting some twenty ponds in Rhode Island, recommended the deserted Joseph Palmer farm property on Yawgoog Pond as a permanent reservation for Scouting. The 150-acre (0.6 km2) piece was leased to Rhode Island Boy Scouts (RIBS) in 1916 and purchased in 1917. Yawgoog and Wincheck, according to local tradition, were the names of two Narragansett Native American Chiefs. The water rights to the pond, all of their equipment, fourteen mill houses, a store, and approximately 200-acre (1 km2) of unimproved land were obtained in 1953 when the Rhode Island Boy Scouts purchased a controlling interest in the Yawgo Line and Twine Company.

Yawgoog is also responsible for creating the first Totin' Chip program. John Page, nicknamed "Johnny Appleseed," created the program in 1950. Six years later, in 1956, the Apprentice in Training (AIT) program was started in an effort to better train incoming staffmen. The AIT corps, the first of its kind, was later renamed the Counselor-in-Training (CIT) corps and set the standard for subsequent programs across the country.

The reservation is divided into three distinct camps. Each camp operates independently and has a dining hall, waterfront, and trading post. Yawgoog campers used to set up tents as part of one centralized camp on what is now Tim O'Neil Field, which is located in Camp Three Point. In 1924, Yawgoog was divided between Upper Camp and Lower Camp, and three camps eventually emerged.

Yawgoog is normally active during the summer for eight weeks of operation. During the off season tent camping is allowed at various campgrounds and cabin camping is allowed in any of the four cabins available. These spaces are available for troops who wish perform outdoor events when summer camp is not in session.

In 1965, the architect responsible for the building work was D. Thomas Russillo. 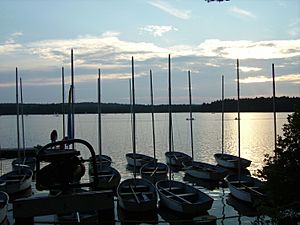 Yawgoog is located in the southwestern corner of Rhode Island—the closest town Hopkinton, RI, which sits at 41.44N -71.79W. The terrain of the reservation is fairly flat, with only one hill (Hill 407) located in the southwestern corner of the reservation. Most of the reservation is forested and consists of deciduous and evergreen trees. On May 4–6, 1930, the camp suffered a forest fire. Much of the forest was destroyed and subsequently replaced with white pines due to their ability to grow quickly. Remnants of the fire are unnoticeable today. There are six main trails that are marked throughout the reservation, and named by colored chevrons (Red, Orange, Yellow, Green, Blue, White) which mark each trail. Trails run through the camps, as well as out through the wilderness to various sights and ponds of the reservation.

The reservation includes three ponds—the main pond is Yawgoog Pond, which serves as the nexus for the three camps for most water and boating activities. To the south, and connected to Yawgoog Pond via a dam and "long cove" is Wincheck Pond. And, to the north of Yawgoog Pond is Hidden Lake (accessible by hiking the "Hidden Lake Trail") found after the forest fire. There is also a trail to nearby Long Pond further south (and downstream from Wincheck). There are several islands on Yawgoog Pond, including Cranberry and Submarine islands in the north corner of the pond, Ant and Schooner Islands which are adjacent to the largest island, named King Phillips Island. King Phillips Island has periodically hosted "adventure camps" over the years but has been largely disused over the past 20 years.

The reservation covers roughly 1800 acres of land which partly extends into Connecticut.

Each camp is usually run by a camp director, assistant camp director, and two program commissioners (three for Camp Sandy Beach), all of which answer to the Reservation Director (currently Thomas J. Sisson). As there are three distinct camps, each has its own songs, cheers, history, and traditions. With the exception of each camp's waterfront and dining lodge, all program centers are available to campers from all three camps.

Camp Three Point, named for the three points of the Scout Oath, was the first of the three camps to be founded. First named Camp Bucklin, it has been deemed "The oldest and most tradition-filled camp" and also "The Camp that was once Yawgoog in its entirety." Today, Camp Three Point features the Challenge Course, the Bucklin Building, the Eagle Badge program, the Arthur Livingston Kelly Environmental Education Center, The Three Point Waterfront, the first New Frontier Center on reservation (no longer open), and the 407 Outfitters, the reservation's largest trading post. Camp Three Point also hosts the Protestant Chapel and the Jewish Synagogue. It is home to the reservation's only basketball court and includes a dam which has become a popular fishing site for scouts. It also is home to the Memorial Bell Tower, which tolls at noon each day in honor of those Scouts who died serving their country. Camp Three Point's camp color is hunter green and yellow. Its mascot is Danny the Deer, who resides in Sharpe Lodge, built in 1924 to serve as the original Buckling Building. Sharpe Lodge has since been fully refurbished in the late 1980s.

After the founding of Camp Three Point, the popularity of the reservation grew to the point where a second camp was needed. Built around Rathom Lodge in the 1920s, Medicine Bow encompasses the center section of Yawgoog's developed land. It houses the only three provisional sites on the reservation: the Counselor-in-Training Corps (CIT), the Baden Powell provisional camp, and the Webelos provisional Camp (moved from Feinstein Youth Camp in Pascoag, Rhode Island in 2007). In addition to provisional sites, Camp Medicine Bow offers many program centers. These include the H. Cushman Anthony Stockade (Crafts Center), the Medicine Bow Waterfront, and the Ashaway Aquatics Center. It also hosts the (Armington Memorial)Health Lodge, and the Catholic Chapel. It is also home to the reservation's motorboat, "The Charlie Brown", which patrols the pond for capsized boats. Medicine Bow's color is red, and its mascot is Elmo the Elk, who presides over Rathom Lodge during meals. Camp Medicine Bow's nickname is, "The Heart of Yawgoog", or "the cream between the two oreo cookies." The current Medicine Bow Camp Director is Philip Orinko and the Assistant Camp Director is Jesse Batty. 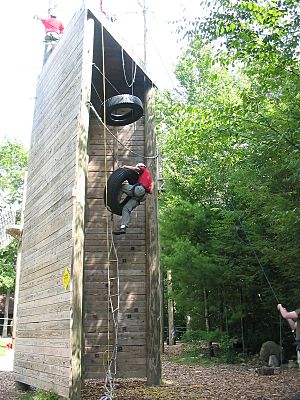 Located furthest into the camp ground and somewhat to the north of Medicine Bow lies Camp Sandy Beach. It was built in the late-1920s around Jesse H. Metcalf Lodge. Today, Sandy Beach calls itself the "youngest and most spirited camp" as well as "The Powerhouse of Yawgoog." It is also the largest of the three camps within the Yawgoog Reservation. Sandy Beach maintains the Lane-Bliven Rifle Range, the Archery Range, the Trap Range, the Sandy Beach Waterfront, the current New Frontiers Program, the Scoutmaster Essentials Program, and the Campcraft or Outdoor Skills center where Scouts learn the traditional skills associated with Scouting like Wilderness Survival, Orienteering or Camping. Sandy Beach's color is blue, and their main mascot is Jim the Moose, though they have several other mascots including two bananas, a rock, and a "crazy" crocodile. The camp also houses the Reservation Baker, who works in the Bake Shoppe attached to the kitchen. Sandy Beach's current Camp Director is Vinny Criscitelli and the Assistant Camp Director is Alex Conway.

One campsite used to be named Camp Baden-Powell, after Boy Scouts founder Robert Baden-Powell. It comprised a circle of tents around a field with a flagpole at its center. The former Baden-Powell site now houses the current Neil Armstrong campsite.

There are many awards offered at Yawgoog Scout Reservation that can be earned by Scouts, Scouters, Troops and Patrols. In addition to the many merit badges offered by the various program centers to Scouts, Scouters can take advantage of a variety of programs to further their knowledge, and Patrols and Troops can earn various honors and ribbons by participation in specific development programs. Of note, are the NRA and National Archery Association awards, along with BSA Mile Swim, Lifeguard BSA, Snorkeling BSA, Sailing and Canoe regattas. Among the reservation-wide awards include the Fishing Derby, where each week the winner takes home a fishing pole. Within each camp, the Troop of the Week and Camp Champion awards are given out, in addition to honor troop and patrol awards.

Camp Yawgoog offers a unique and distinctive shooting sports award, the Bucklin Marksmanship Medal. Scouts wishing to earn the medal must shoot at 10 consecutive targets, 6 from the prone position, 4 standing, at 50'. The sum of the 10 targets must meet or exceed 400 points. The Scout who scores highest for the summer is awarded a rifle and case by the Camp. In the event of a tie, a shootoff is arranged during the last week of camp.

Yawgoog Segments are unique awards to the camp, and have been fairly popular for years. Segments are small, curved patches which go around the circular Yawgoog patch. Some choose to sew the segments and central patch directly on their uniform shirt, while others sew them to a circular piece of material such as felt or leather, or insert them into a plastic holder which can be worn from a pocket button. A felt circle found at the trading post can hold up to four rows of segments. The original ten segments started in 1951 were strips of cloth. The original cloth segments included the three CYs, the 1 through Veteran years, the Knights of Yawgoog and the now defunct Wincheck braves. Since segments have been added for Camp (TP,MB,SB), additional camping years (V-6 through V-9), Shooting sports (Yeoman, Riffle and Trap), Challenge/rows courses (AI,AC,AII,AIII and formerly CV), Aquatics (Mile swimming, kayaking, canoeing, sailing), Various camp areas (Campcraft, HCAS, YHC, Barn), Hiking (Hiker of Yawgoog, GPS), Resident state, troop award (Troop of the week), Leadership (SPL, SM, ASM, CIT, Staff), and jubilee years (25, 50, 75 and 100).As a member of the CIT Corps, a Scout may earn the Top Basic award, for those who have excelled as a leader during their Basic week of Counselor Training. This award is determined by a vote among the Basic week Scouts. Members of the CIT Corps are also graded after their field weeks. The CIT with the top performance during his basic and field weeks for the entire summer is given the Frederick W. Marvel award. The award includes a certificate, and a gold medal suspended from a red, white, and blue ribbon.

In 2008 JoAnn Guzeika and her husband were the only couple to be married at Yawgoog Scout Reservation, in the St. John Bosco Chapel. An earlier couple of a retired staff member and his wife renewed their vows at the Three Point waterfront, which included a ceremonial plunge into Yawgoog Pond.

In 2011, filming took place for the 2012 film Moonrise Kingdom at various places in the camp.

All content from Kiddle encyclopedia articles (including the article images and facts) can be freely used under Attribution-ShareAlike license, unless stated otherwise. Cite this article:
Yawgoog Scout Reservation Facts for Kids. Kiddle Encyclopedia.