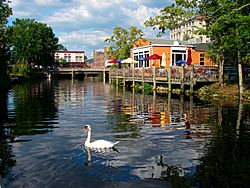 The Pawcatuck River, looking north, with Westerly, RI buildings in view, and Pawcatuck, CT just off to left

The Pawcatuck River is a river in the US states of Rhode Island and Connecticut flowing approximately 34 miles (55 km). There are eight dams along the river's length. USS Pawcatuck was named after the river.

The river was specified as the western boundary of the Colony of Rhode Island and Providence Plantations in the original charter of 1636. It was formerly called the Charles River between its source and the mouth of the Wood River near Bradford, Rhode Island.

On April 20, 2006, an Atlantic white-sided dolphin swam several miles up the river to Westerly, Rhode Island from Little Narragansett Bay at the east end of Fishers Island Sound. It spent several hours at Westerly-Pawcatuck, near the bridge connecting Rhode Island and Connecticut, while several hundred spectators gathered to see it. According to the Mystic Aquarium, the dolphin may have become separated from its pod at sea and had been searching for it. It was captured and taken later that night to the aquarium, where it died; it had become sick, underweight, and bruised during its journey upriver.

The Pawcatuck River flooded during a fierce rainstorm in New England on March 29, 2010, with waters overflowing into both Westerly and Pawcatuck. Both towns evacuated low-lying areas, and some historic buildings were lost to flood damage along the course of the river, such as a 150-year-old general store in North Stonington. The bridge in downtown Westerly-Pawcatuck was closed for several weeks until the river had gone down enough for divers to inspect it for safety.

Below is a list of all crossings over the Pawcatuck River. The list starts at the headwaters and goes downstream.

In addition to many unnamed tributaries, the following brooks and rivers feed the Pawcatuck:

All content from Kiddle encyclopedia articles (including the article images and facts) can be freely used under Attribution-ShareAlike license, unless stated otherwise. Cite this article:
Pawcatuck River Facts for Kids. Kiddle Encyclopedia.