Mystic Aquarium is a marine aquarium in Mystic, Connecticut. It is one of only two U.S. facilities holding Steller sea lions, and it has the only beluga whales in New England. Special exhibits include a ray and shark touch pool, an African penguin exhibit, a jelly gallery, and the "Jurassic Giants" dinosaur exhibit. The aquarium is a member of the Alliance of Marine Mammal Parks and Aquariums (AMMPA) and is an accredited member of the Association of Zoos and Aquariums (AZA). It is a subsidiary of the Sea Research Foundation, Inc. 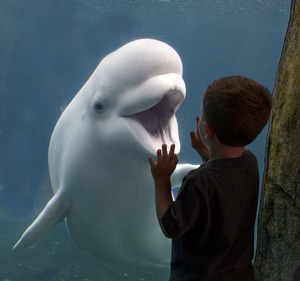 Mystic Aquarium was first opened in 1973 as a privately owned corporation. Industrialist and philanthropist Kelvin Smith was the primary shareholder; he chose Mystic, Connecticut as the site because of the area's scenic shoreline and rich maritime history. In 1999, the aquarium and Ballard's Institute for Exploration combined to form a $52 million expansion. The expansion features the Arctic Coast, a 1-acre (4,000 m2) outdoor beluga whale display containing 760,000-US-gallon (2,900,000 l) of water.

The aquarium hosted several marine mammals from the Shedd Aquarium while it was undergoing renovation to its marine mammal habitat between September 2008 and May 2009. The National Geographic Society's Crittercam exhibit was set up at the aquarium in February 2011 but has since been removed.

In 2012, Mystic Aquarium opened the Ocean Exploration Center featuring maps, diagrams, and models from Dr. Robert Ballard's explorations of the Black Sea and of the wreck of the RMS Titanic. Presentations in the Nautilus Live Theater told more of Ballard's recent explorations and the ship E/V Nautilus. Audience members had a live link to crew members on the ship at sea and could ask them questions directly. The aquarium opened Titanic – 12,450 Feet Below on April 12, 2012 to commemorate the 100th anniversary of the sinking of the RMS Titanic. The exhibit was created by Ballard, who found the Titanic in 1985, and Tim Delaney, a former Walt Disney Imagineer. It was funded by a $1 million donation from United Technologies Corporation.

The aquarium was presented with the National Medal for Museum and Library Service in 2014. The award was accepted by Sea Research Foundation's president Stephen M. Coan. The Titanic exhibit was also remodeled into a new 7,000 sq ft (650 m2) exhibit named Exploration: Wild in 2015, after Ballard ended his association with the aquarium. The new exhibit was designed entirely by aquarium staff and cost $500,000; it focuses on conservation and consists of interactive environments highlighting desert, rainforest, the Arctic, wetlands, and the open ocean. 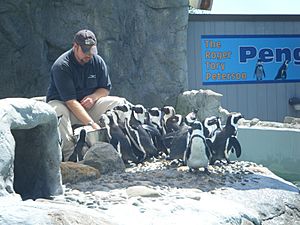 Within the aquarium, encounter programs are offered to visitors for an additional fee, who can get close to the African penguins, touch and stand in the water with beluga whales, touch bamboo sharks, and feed and touch sting rays in a special pool. 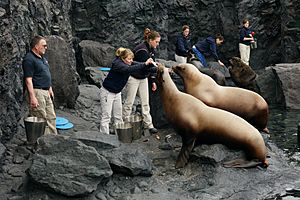 All content from Kiddle encyclopedia articles (including the article images and facts) can be freely used under Attribution-ShareAlike license, unless stated otherwise. Cite this article:
Mystic Aquarium Facts for Kids. Kiddle Encyclopedia.