Carolina is a village that straddles the border of the towns of Charlestown and Richmond on the Pawcatuck River in Washington County, Rhode Island. Rhode Island Route 112 passes through the village. Carolina is identified as a census-designated place, with a population of 970 at the 2010 census.

The Carolina Village Historic District was listed on the National Register of Historic Places in 1974. The district includes examples of Greek Revival, Italianate, and Queen Anne architecture. The district comprises 71 properties over an area of 115 acres (0.47 km2) and includes the former mill complex and nearby residences. The district encompasses properties along Carolina Main Street and Carolina Back Road and their vicinity between Pine Hill Road and Alton-Carolina Road (Route 91), including houses along Butter Lane, Tall Pines Drive, Schoolhouse Lane, Carolina Mill Lane, and Downs Court.

Carolina also has its own zip code. 02812 is the post office assigned to the village. Only residents on the Richmond side use it on their address, but the post office itself is located in Charlestown.

In 1802 the first wooden dam and a gristmill were built on the river at the site of the village, which was then known as Nichols Bridge. A few years later, a cotton mill was established, with production buildings mostly located in Richmond, but some employee housing located across the river in Charlestown. In 1843 Rowland G. Hazard bought the mill, renaming it the Carolina Mills Company in honor of his wife, Caroline Newbold Hazard of South Kingstown. The village around the mill was also given the same name. The Rhode Island Historic Preservation Commission described 19th-century Carolina as a "center for the surrounding area, including a school, a church, a post office, a bank, several stores, a blacksmith shop, and halls for meetings, lectures, and 'entertainments'." The local post office was named "Carolina Mills" from 1850 until 1879, when it was renamed "Carolina."

In 1862 the complex switched from cotton textile production to production of woolens. The Hazard family operated the mill complex until 1863, when they leased it to T.R. Hyde & Co., which was a partnership between Thomas R. Hyde and Rowland Hazard II that operated the mill until 1868. The mill was sold to new owners in 1869, but Rowland Hazard II operated it as a lessee until at least 1877. The mill complex operated until 1930 or 1935. 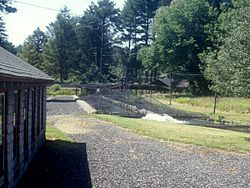 Raceways for trout and a fish hatchery house at the American Fish Culture Company, Carolina, Rhode Island in 1994

The mill complex deteriorated after its closure, and Carolina became a residential community. However, other components of the village remained intact and the village was listed on the National Register in 1974. The portion of Carolina village in the town of Richmond includes a "corridor" of about two dozen one-story and one-and-a-half-story cottages and other domestic buildings built between about 1840 and 1870. Other buildings of historic interest include the remains of the mill; the Carolina School, built in 1845; the Carolina Free Will Baptist Church, built in 1845 and relocated in 1865; the octagonal Albert Potter House, built in 1867; and a 2½-story Queen Anne-style house built by Ellison Tinkham, who was one of the owners of the mills from 1868 until 1907.

Carolina was also the site of the establishment of one of the first trout farms in America. In 1877 John W. Hoxie established the Clearwater Trout Farm on White Brook from land leased from Rowland G. Hazard, north of the village center. Two years later Hoxie's brother, Charles, established his own White Brook Trout Hatchery on an adjacent plot of land along the brook. By 1892 the White Brook Trout Hatchery was incorporated as the American Fish Culture Company with Rowland Hazard II as a minority shareholder. In 1899 the Hazard family gained controlling interest in the corporation. Upon the death of John W. Hoxie in 1903, the R. Hazard Estate acquired full interest in Clearwater Trout Farm, and both farms were eventually merged and operated as American Fish Culture Company by the Hazard Family until its sale to the State of Rhode Island in 1995. By the early 1920s, American Fish Culture Company was considered to be the largest fish farm in America.

All content from Kiddle encyclopedia articles (including the article images and facts) can be freely used under Attribution-ShareAlike license, unless stated otherwise. Cite this article:
Carolina, Rhode Island Facts for Kids. Kiddle Encyclopedia.