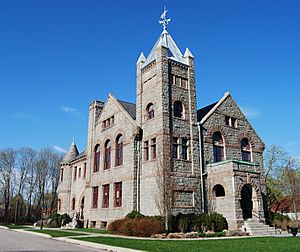 Old Washington County Courthouse in the village of West Kingston

The William C. O'Neill Bike Path starts in the village of West Kingston at the train station, and runs through most of South Kingstown, ending in Narragansett.

All content from Kiddle encyclopedia articles (including the article images and facts) can be freely used under Attribution-ShareAlike license, unless stated otherwise. Cite this article:
West Kingston, Rhode Island Facts for Kids. Kiddle Encyclopedia.