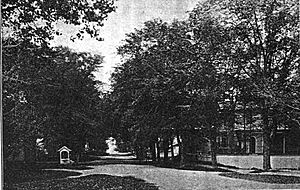 Kingston in 1900 on Kingstown Road near the intersection of South Road, showing the village well 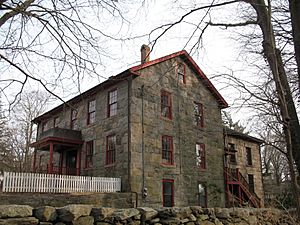 Washington County Jail (1858 & 1861). This building housed prisoners awaiting trial in the county courthouse. It is the current home of the South County History Center.

Kingston is a village and a census-designated place within the town of South Kingstown in Washington County, Rhode Island, United States, and the site of the main campus of the University of Rhode Island. The population was 6,974 at the 2010 census. Much of the village center is listed on the National Register of Historic Places as Kingston Village Historic District. It was originally known as Little Rest.

The village was originally called Little Rest, but was renamed Kingston in 1826. It was the county seat for Washington County (formerly Kings County) from 1752 until 1894, when a new courthouse was built in nearby West Kingston. West Kingston is also the site of the historic Kingston Railroad Station which opened in June, 1875. The station is served by Amtrak on its Northeast Corridor.

Churches and houses of worship

Religious denominations represented with churches in Kingston or on the university campus are Roman Catholicism, the United Church of Christ, Episcopalians, United Methodists, Baptists, and Judaism.

In addition to the university, major businesses in Kingston include APC by Schneider Electric and the Arnold Lumber Company.

Public schools are operated by the South Kingstown School District. Educational institutions in Kingston include:

All content from Kiddle encyclopedia articles (including the article images and facts) can be freely used under Attribution-ShareAlike license, unless stated otherwise. Cite this article:
Kingston, Rhode Island Facts for Kids. Kiddle Encyclopedia.