Wickford is a small village in the town of North Kingstown, Rhode Island, United States, which is named after Wickford in Essex, England. Wickford is located on the west side of Narragansett Bay, just about a 20-minute drive across two bridges from Newport, Rhode Island. The village is built around one of the most well-protected natural harbors on the eastern seaboard, and features one of the largest collections of 18th century dwellings to be found anywhere in the northeast. Today the majority of the village's historic homes and buildings (most in private hands) remain largely intact upon their original foundations.

Wickford is generally said to have been settled around 1637, when theologian and Rhode Island state founder Roger Williams bought a parcel of land from sachem Canonicus and established a trading post there. Prior to European contact, the lands in and around Wickford had long served as dwelling, fishing, and hunting grounds to the Narragansett people, who were one of New England's more powerful and prominent tribes at the time when Williams found his way to their shores.

Richard Smith established a trading post on Narragansett Bay near the mouth of Cocumscussoc Brook at about the same time as Williams' purchase. He was a Puritan from Gloucester, England who had originally settled in the Plymouth Colony's town of Taunton. In 1637, he built what appears to have been a rather grand, gabled house on the site, which Williams described in his letters as the first English house in the area. This house was also heavily fortified, and thus became known as Smith's Castle. 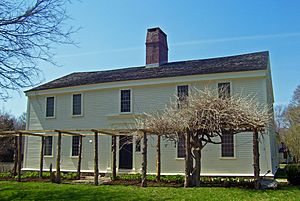 During 1651, Smith purchased Roger Williams' trading post, and continued expanding his holdings over the years, building what came to be called the Cocumscussoc Plantation. His plantation became a center of social, religious, and political life in the area. During King Philip's War, the only incident of an individual being hanged, drawn, and quartered for treason on American soil took place at Smith's Castle in 1676. Joshua Tefft was executed by this method, an English colonist accused of having fought on the side of the Narragansetts during the Great Swamp Fight.

During King Philip's War, many of the homes were destroyed that had been built during this brief period of expansion. One of the homes that went was Smith's Castle, which was burned to the ground in 1676. Two years later, Richard Smith Jr. built a new home on the old foundation, retaining the name "Smith's Castle." This structure remains standing today and is one of the area's most visited historic sites.

Following King Philip's War, Wickford grew steadily as a port and shipbuilding center. To this day, the waterfront remains very active. Captain Lodowick Updike developed much of the early village between 1709-1715 after inheriting the land in 1692 from his uncle Richard Smith, owner of Smith's Castle and the surrounding lands. The village was often interchangeably called "Updike's New Town" or "Wickford" in honor of the English home town of the wife of Governor John Winthrop of Connecticut. In 1707, the Old Narragansett Church was founded in downtown Wickford, and survives as the oldest Episcopal church building in the northeastern United States. The British military attempted to raid Wickford during the American Revolution in 1776, but the "Wickford gun" was used to thwart the invading British expedition, a single cannon commissioned by the General Assembly for the town to defend itself. Later, the gun was taken to Point Judith, despite local Tories' attempts to disarm the weapon. There it was used to force a British ship to surrender its crew. The prisoners were removed to Providence.

The Wickford Art Festival—held in July of every year since 1962 and hosted by the Wickford Art Association—is one of the leading such events on the eastern seaboard, attracting hundreds of prominent artists and thousands of spectators from across the country and around the world.

All content from Kiddle encyclopedia articles (including the article images and facts) can be freely used under Attribution-ShareAlike license, unless stated otherwise. Cite this article:
Wickford, Rhode Island Facts for Kids. Kiddle Encyclopedia.