Formed as Greenwich in 1677, it was named for Greenwich, England. It was renamed Dedford in 1686 but reverted to its original name in 1689. In 1741 the more rural western three-quarters of the town was set off as West Greenwich, the remaining quarter of it thenceforth being called East Greenwich. Until 1854, it was one of the five state capitals for Rhode Island. The General Assembly, when meeting in East Greenwich, used the local courthouse, which is today the town hall. East Greenwich Village is located in the northeastern part of the town and extends north about 1.5 km into the town of Warwick, Rhode Island. The town is now known for its waterfront and downtown business district.

East Greenwich was founded in 1677 by the General Assembly in an attempt to solidify land claims against those of Connecticut and the Narragansett Proprietors. The Assembly designated 5000 acres to the new town and provided lots to settlers who would agree to live there. Locals quickly took the assembly up on this offer, and the quick establishment of the town helped hold back plans of Connecticut in pushing their border eastward. East Greenwich was therefore the only Rhode Island town established by an act of government, not commercial interests. In 1687, the Narragansett Proprietors attempted to settle land north of Wickford which overlapped with the land of East Greenwich; however, the Massachusetts governor Sir Edmund Andros, who had authority to settle the dispute, ruled in favor of the existing East Greenwich settlement.

In the 18th century, the government released previously reserved waterfront property in small lots. Beginning in 1711, the local government granted these lots to any person who would pay one shilling and promise to build a commercial building of a minimum size. By 1725, a community had developed, complete with a schoolhouse and a graveyard. However, citizens of the town complained that attending town meetings was too difficult due to the size of the town, which prompted the splitting of West Greenwich into its own town in 1741. The town erected a courthouse when East Greenwich was designated the shire town of the newly formed Kent County, which had been separated from Providence County in 1750.

In its colonial days, the town was also home to followers of Jemima Wilkinson, an ex-Quaker who later defected to the New Light Baptists. After she suffered from a severe illness, Wilkinson believed that she had died and that her body was now possessed by an entity which she called the "Publick Universal Friend". Her followers financed a meetinghouse within the town.

20 percent of the land in East Greenwich consists of undeveloped woods and farmland, although development continues to bring this proportion down.

Many restaurants, bars, and clubs sit on the waterfront. East Greenwich Cove also has ample boat parking. There is also a public dock good for fishing and eating, and a dock with a small beach. Across from the coast is Goddard Memorial State Park, which has many beaches including Sandy Point and has easy access from East Greenwich Cove.

Scalloptown Park has been completed at the southern end of Greenwich Cove, built atop the old town landfill. However, it is not part of historical Scalloptown, which was another name for the waterfront in earlier times. Home to a poor community of squatters in the late nineteenth century to the earliest twentieth century, Scalloptown became a community untethered from the rest of East Greenwich. In contrast to the other villages in East Greenwich, Scalloptown consisted primarily of poor whites and African Americans. The true Scalloptown goes from the town dock down past the clubs to Fin's Marina.

Legend of The Greenwich Voyager

In the Spring of 1791, US Navy Captain Joseph Jonathan (of Providence, Rhode Island) and his crew captured a group of high-class extortionists attempting to flee the United States. According to the Legend, Jonathan defected from his post upon returning from the battle and made off with almost 18,000 oz. of 21K gold. Without the evidence stolen by Jonathan, the extortionists were released from police custody. The events that followed are still unclear, but Jonathan was discovered dead in his home alongside all 7 members of the extortionist crew. According to the legend; the gold, which today would be valued at $19.5 million, is buried somewhere in the Frenchtown area, where Jonathan lived. His home was located inside of Goddard Memorial State Park in the North Eastern section, and it is believed by some that a description of the location of the gold is in that general vicinity. The legend warns that if the gold, which the town of East Greenwich is literally built upon, is moved, the town will crumble and all who live in it will turn against he who unearthed the gold.

There were 4,960 households out of which 36.2% had children under the age of 18 living with them, 61.5% were married couples living together, 7.9% had a female householder with no husband present, and 28.6% were non-families. 24.2% of all households were made up of individuals and 9.7% had someone living alone who was 65 years of age or older. The average household size was 2.58 and the average family size was 3.12. 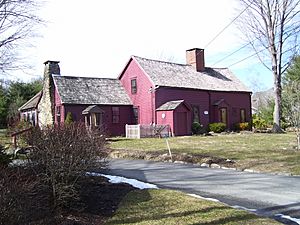 Clement Weaver House, a historic stone ender, built 1679, is one of the oldest homes in Rhode Island.

All content from Kiddle encyclopedia articles (including the article images and facts) can be freely used under Attribution-ShareAlike license, unless stated otherwise. Cite this article:
East Greenwich, Rhode Island Facts for Kids. Kiddle Encyclopedia.