Coventry is a town in Kent County, Rhode Island, United States. The population was 35,014 at the 2010 census.

According to the United States Census Bureau, the town has a total area of 62.3 sq mi (161 km2). 59.5 sq mi (154 km2) of it is land and 2.8 sq mi (7.3 km2) of it (4.49%) is water. The town is bordered by West Warwick to the east, Foster, Scituate, and Cranston to the north, West Greenwich and East Greenwich to the south, and Sterling, Connecticut to the west. It is the largest town in land area in Rhode Island, being surpassed in total area only by South Kingstown, Rhode Island, with water and land area of 79.8 square miles (207 km2).

Coventry was first settled by English colonists in the early 18th century, when the town was part of Warwick. Since the area was so far away from the center of Warwick, the section that became Coventry grew very slowly. However, by 1741, enough farmers (about 100 families) had settled in the area that they petitioned the General Assembly of Rhode Island to create their own Town. The petition was granted, and the new Town was named Coventry, after the English city of Coventry. For the rest of the 18th century, Coventry remained a rural town populated by farmers. Among the buildings that survive are the Waterman Tavern (1740s), the Nathanael Greene Homestead (1770), and the Paine Homestead (late 17th century/early 18th century). The oldest church, Maple Root Baptist Church, dates from the end of the 18th century. The congregation was organized in 1762 and was affiliated with the General Six-Principle Baptists.

During the American Revolutionary War, the people of Coventry were supporters of the patriot cause. Nathanael Greene, a resident of Coventry, rose through the ranks to become a leading general of the American army. By the end of the war, Greene was second in command in the US army after George Washington.

In the 19th century, the Industrial Revolution came to Coventry with the building of the first mill in Anthony. Over the next century, the eastern end of town became very industrialized, with manufacturing centers being located in Anthony, Washington, Quidnick, and Harris villages. Many of the old factories still stand in the town, and the village centers (in particular, Anthony and Quidnick) remain mostly intact. The demographics of the town changed, as industrial jobs at these new mill villages attracted French Canadian and Irish immigrants. By the end of the 19th century, almost one fourth of the population was born outside the US, and French was the primary language for many of the people in the eastern part of Coventry. Not all immigrants worked in the factories. Census records from the late 19th century show that some owned farms.

By comparison, the western end of the town remained very rural, with the only centers of population being located at Greene and Summit, both established as railroad stations on the New York, New Haven and Hartford Railroad. 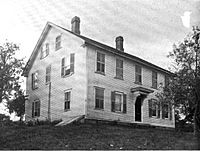 In the 20th century, the Town went through much change. The advent of the automobile brought an end of the railroad. (This track was dismantled in the 1970s, and in the early 21st century, the right of way was revitalized as the Washington Secondary Rail Trail/Greenway). By the mid-20th century, industry had largely left the Town and most of the factories closed. 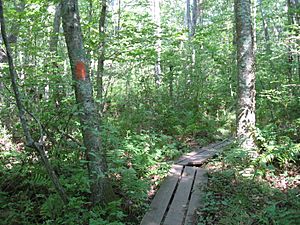 The town had been investing in the Coventry Greenway. The Coventry Greenway is a pedestrian and bicycle path built on the old New York, New Haven and Hartford Railroad right-of-way and is part of the East Coast Greenway (Nationally). The path travels 15 miles (24 km) from the Connecticut State line to the West Warwick town line. The Coventry Greenway has recently undergone a massive renovation and has reopened to the public as a walking, cycling, and horse trail.

Coventry has numerous villages founded in the 19th century; they are:

There were 12,596 households out of which 34.7% had children under the age of 18 living with them, 60.4% were married couples living together, 10.0% had a female householder with no husband present, and 26.2% were non-families. 21.2% of all households were made up of individuals and 9.1% had someone living alone who was 65 years of age or older. The average household size was 2.63 and the average family size was 3.07.

Coventry, Rhode Island is twinned with:

All content from Kiddle encyclopedia articles (including the article images and facts) can be freely used under Attribution-ShareAlike license, unless stated otherwise. Cite this article:
Coventry, Rhode Island Facts for Kids. Kiddle Encyclopedia.