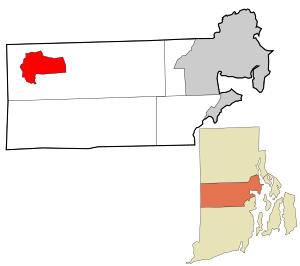 Location in Kent County and the state of Rhode Island. 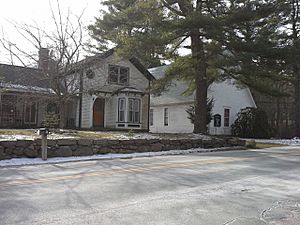 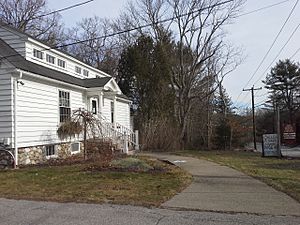 Greene is a village and census-designated place in the southwest corner of the town of Coventry, Rhode Island, United States. It is on the Connecticut border, just north of West Greenwich. The name derives from Nathanael Greene, a Rhode Island-born general in the American Revolution.

Until 1854 Greene was a swamp with a cart path running through it. The path connected Hopkins Hollow to the south and Rice City in the north. Then in the early 1850s, the railroad came to the area and the original train stop was known as "Coffin Station" because Coffin Road was nearest road. In 1856 railroad officials renamed the station "Greene" after the Revolutionary War hero because of the bad associations with the name "coffin." It was decided to build a depot where local farmers could sell their produce to the trains heading towards Providence and Hartford. Within a few years of opening, the Greene depot was the most important station in western Rhode Island. Every morning farmers would bring their produce to sell to the 7:25 milk train going to Providence. As the station grew in importance, a village grew up around the station, sending large amounts of milk, wood and cranberries via train. Eventually, a school, church, library, and meeting hall were built as well as a religious campground in the Greene area, where the Advent Christian Church held annual camp meetings starting in 1880 on what was previously part of the Peckham estate. The religious campground was perhaps the most important one in Rhode Island, where every summer, camp meetings were held, which were held in the style more commonly found in the South and in the Mid-West. The railroad would add on extra cars to their trains, and up to 10,000 people would attend. After the beginning of the 20th century, the camp meeting declined and ended decades later.

With the coming of the automobile in the first part of the 20th century, the railroad's importance declined greatly, and in 1969, closed. Today, Greene is a shadow of what it once was. However, the village is mostly intact, with most of the buildings dating from the late 19th century.

All content from Kiddle encyclopedia articles (including the article images and facts) can be freely used under Attribution-ShareAlike license, unless stated otherwise. Cite this article:
Greene, Rhode Island Facts for Kids. Kiddle Encyclopedia.