West Warwick is a town in Kent County, Rhode Island, United States. The population was 29,191 at the 2010 census.

West Warwick was incorporated in 1913, making it the youngest town in the state. Prior to 1913, the town, situated on the western bank of the Pawtuxet River, was the population and industrial center of the larger town of Warwick. The town split because local Democratic politicians wanted to consolidate their power and isolate their section of town from the Republican-dominated farmland in the east.

The area that is now the town of West Warwick was the site of some of the earliest textile mills in the United States situated along the banks of the north and south branches of the Pawtuxet River. These small mill villages would play an important role in the early development of the textile industry in North America. Lippitt Mill founded in 1809 by Revolutionary War hero, Christopher Lippitt, was one of the first mills in the area.

On February 20, 2003, The Station nightclub fire was caused by pyrotechnics used indoors during a Great White concert. The fire killed 100 patrons. The fire occurred in a single-story wooden building that was more than 70 years old. It had previously served as an Italian restaurant, and during World War II was a popular hangout for sailors from nearby Quonset Point Naval Air Station.

In 2010, a massive rainfall caused the Pawtuxet River to rise to 21 feet, which is 12 feet above flood stage which caused flooding through much of the town.

The following villages are located in West Warwick: 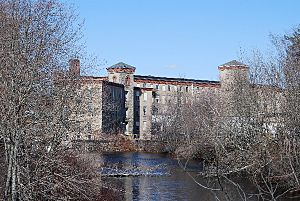 All content from Kiddle encyclopedia articles (including the article images and facts) can be freely used under Attribution-ShareAlike license, unless stated otherwise. Cite this article:
West Warwick, Rhode Island Facts for Kids. Kiddle Encyclopedia.