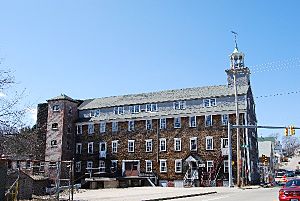 Lippitt was founded by Revolutionary War General Christopher Lippitt and his brother Charles Lippitt when they and their partners constructed Lippitt Mill in 1809 and the surrounding mill village for their workers. During the Depression following of War of 1812, the Lippitt Manufacturing Company survived by supplying yarn to convict weavers in the Vermont prison. The original mill and several of the workers row houses still survive. It is one of the oldest cotton mills in New England and has been sold to several owners since the Lippitt family sold it 1889.

All content from Kiddle encyclopedia articles (including the article images and facts) can be freely used under Attribution-ShareAlike license, unless stated otherwise. Cite this article:
Lippitt, Rhode Island Facts for Kids. Kiddle Encyclopedia.