Kids Encyclopedia Facts
This page is about the river in Rhode Island. For the river in Maryland, see Patuxent River. 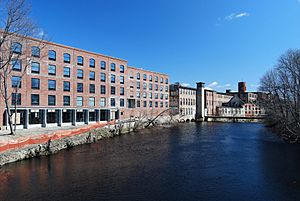 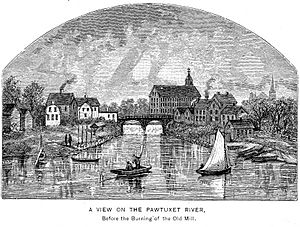 The area around the river was occupied by members of the Patuxet tribe, who were part of the larger Narragansett tribe. In the native language, the word "pawtuxet" means "little falls."

The Pawtuxet River Valley played an important role in the early development of the textile industry in New England during the 19th century.

The river is formed by the confluence of North and South branches of the river at River Point village in West Warwick. From there the river continues roughly east, through West Warwick, Warwick and Cranston, emptying into the Providence River at Pawtuxet Village. The last three miles (5 km) of the river form the boundary between Cranston and Warwick.

Below is a list of all crossings over the Pawtuxet River. The list starts at the headwaters and goes downstream:

Three Ponds Brook and the Pocasset River are the Pawtuxet River's only named tributaries, though it has many unnamed streams that also feed it.

The Rhode Island Department of Environmental Management's Rhode Island Anadromous Fish Restoration Plan gives the Pawtuxet River a low overall ranking due to the river's poor water quality and the large number of dams. However, the Pawtuxet River Authority and Watershed Council [2] is working with state and federal partners to evaluate fish passage alternatives for the first dam on the Pawtuxet, the Pawtuxet Falls Dam. Fish passage at this dam will open up 7.5 miles (12.1 km) of spawning habitat above the dam on the main stem of the river.

Water use and availability

The Scituate Reservoir on the North Branch of the Pawtuxet River provides over 60% of the water supply to the State of Rhode Island (USGS, Estimated Water Use and Availability in the Pawtuxet and Quinebaug River Basins, Rhode Island). This water is supplied to almost all the other basins in Rhode Island including the Blackstone River, Ten Mile River, Moshassuck River, Woonasquatucket River, Narragansett Bay and the Westport River. About 22% of the major public supply withdrawn from the Pawtuxet basin is returned to the basin and about 51% is exported to other basins. Some of the water exported out of the basin for drinking water returns to the Pawtuxet River as wastewater.

The US Geological Survey has five gauges in the Pawtuxet Watershed

The Pawtuxet River experiences periodic flooding. In October 2005 remnants of Tropical Storm Tammy produced torrential rains over New England. From October 13–15, the National Weather Service reported 7 to 9 inches (230 mm) of rain in Rhode Island and the Pawtuxet River at Cranston and Warwick recorded its second worst flood, cresting at a stage of 13.68 feet (4.17 m).

On March 29 and 30, 2010, an additional 6-10 inches of rainfall across Southern New England in addition to the 3+ inches that fell on the 23rd, bringing the total rainfall for the month of March to over 16" and causing the Pawtuxet River to exceed the previous flood level occurring only two weeks prior. The river crested at 20.8 feet (6.3 m) in the morning of March 31. This caused the worst flooding in over 200 years for the area, swamping the Warwick Mall, and many homes in the area forcing many evacuations across Rhode Island and Southeastern Massachusetts. The flooding also forced many schools to be closed for an extended period of time, due to road closures and washouts.

There are two river organizations that focus on the Pawtuxet River:

All content from Kiddle encyclopedia articles (including the article images and facts) can be freely used under Attribution-ShareAlike license, unless stated otherwise. Cite this article:
Pawtuxet River Facts for Kids. Kiddle Encyclopedia.