The house is a 2+1⁄2-story wood-frame structure with a gable roof, two interior chimneys, and clapboarded exterior. It is five bays wide and two deep, with a center entry framed by pilasters and topped by a transom window, triangular pediment, and carved fanlight motif. The house follows a typical late-Georgian center-hall plan, with four rooms on each level, two on either side of the central hall. On the lower level, the front right room housed Nathanael Greene's 300+ volume library, while the rear room served as the kitchen. The rooms on the left served as parlor and dining room. There are four bedrooms on the second floor, and the attic space was later also converted into bedrooms. 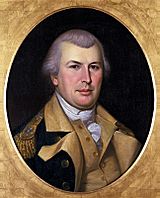 The house was built by Nathanael Greene in 1770, part of a property encompassing 2,000 acres (810 ha), and served as his family's home through the Revolutionary War. In 1783 Greene moved the family to Newport, before eventually relocating to Georgia, where he died in 1786. This house he sold to his brother Jacob. It remained in Greene family hands until 1899, although it became run-down and was used as a tenement house in the later years. In 1919 the Nathanael Greene Homestead Association was formed to restore and care for the property. It is now a house museum, open to the public.

It was declared a National Historic Landmark in 1972, and was included in the Anthony Village Historic District in 2010. 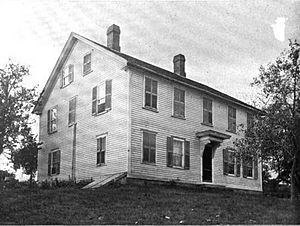 All content from Kiddle encyclopedia articles (including the article images and facts) can be freely used under Attribution-ShareAlike license, unless stated otherwise. Cite this article:
General Nathanael Greene Homestead Facts for Kids. Kiddle Encyclopedia.