Rodanthe ( roh-DAN-thee) is an unincorporated community and census-designated place (CDP) located in Dare County, North Carolina, United States, on Hatteras Island, part of North Carolina's Outer Banks. As of the 2010 census it had a population of 261. Rodanthe, along with Waves and Salvo, are part of the settlement of Chicamacomico. Rodanthe includes the original Chicamacomico Life-Saving Station, decommissioned in 1954, but now a museum.

Rodanthe is served by North Carolina Highway 12, which runs north–south through town. The Chicamacomico area is bordered to the north by Pea Island National Wildlife Refuge and to the south by Cape Hatteras National Seashore, a situation which limits potential growth. The town is bordered by the Atlantic Ocean to the east and Pamlico Sound to the west.

Rodanthe is the easternmost point of North Carolina. It is famous for its observation of "Old Christmas" on January 6, formerly Christmas, December 25, by the Julian Calendar, a custom held over from the original settlers who still used the "Old Style" calendar. A mythical beast, "Old Buck"—possibly related to Belsnikel or Krampus who are companions of Saint Nicholas in Christmas festivities—is said to appear at the celebration. 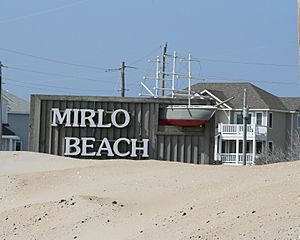 The residents of Rodanthe are governed by the Dare County Board of Commissioners. Rodanthe is part of District 4, along with Avon, Buxton, Frisco, Hatteras, Waves and Salvo.

The Chicamacomico Life Saving Station and Oregon Inlet Station are listed on the National Register of Historic Places.

Many of Rodanthe's restaurants, shops and markets are seasonal with many closing during the winter months and reopening the following spring. Many of these are family-owned, rather than chain franchises. Provisions can still be purchased on the Outer Banks during the winter months, but a short drive south to the town of Avon or north to Nags Head is required.

There are only two motels within the larger settlement of Chicamacomico. There are, however, three inns or bed and breakfasts on the island of Hatteras ("The Inn on Pamlico Sound", "Cape Hatteras Bed and Breakfast", and the "Seaside Inn".) There are numerous rental houses, large and small, as well as numerous campgrounds ranging from deluxe to rustic ("Camp Hatteras", "Ocean Waves", "Cape Hatteras KOA", etc.). Several smaller campgrounds cater to water sports enthusiasts. Local water sports include fishing, kayaking (both ocean and sound-side), swimming, sailboarding and kiteboarding, among others. 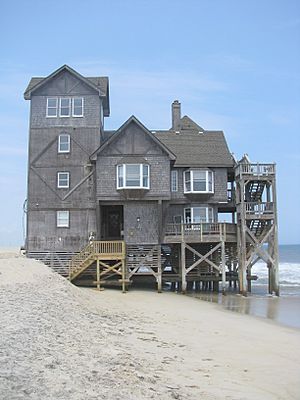 The rental house, Serendipity, used in filming Nights in Rodanthe

In 2002, Nicholas Sparks published the book Nights in Rodanthe that was later adapted into a movie. George C. Wolfe directed the film adaptation, which was partially filmed in the town of Rodanthe and entirely filmed in eastern North Carolina – including Cape Hatteras, Southport and Wilmington. The movie was released on September 26, 2008. Several Rodanthe landmarks such as the Rodanthe Pier were used during filming. During film production, one of the rental houses, "Serendipity", the northeastern-most house in Rodanthe, was transformed into the fictional "Inn at Rodanthe". This house was damaged and condemned after a nor'easter storm in November 2009. The house was saved from demolition by a private businessman, Ben Huss, a bail bondsman, from Newton, North Carolina, and moved less than one mile south.

All content from Kiddle encyclopedia articles (including the article images and facts) can be freely used under Attribution-ShareAlike license, unless stated otherwise. Cite this article:
Rodanthe, North Carolina Facts for Kids. Kiddle Encyclopedia.