Waves is an unincorporated community and census-designated place (CDP) in Dare County, North Carolina, United States. It is on Hatteras Island, part of North Carolina's Outer Banks. As of the 2010 census it had a population of 134. Waves, along with Rodanthe and Salvo, are part of the settlement of Chicamacomico.

The residents of Waves are governed by the Dare County Board of Commissioners. Waves is part of District 4, along with Avon, Buxton, Frisco, Hatteras, Rodanthe and Salvo.

The community was so named on account of waves at the beach.

The Rasmus Midgett House was listed on the National Register of Historic Places in 2009.

The northern border of Waves is generally considered to be the ditch that runs under Highway 12 just south of Resort Rodanthe Drive. The southern border, separating Waves and Salvo, is more ambiguous. Long-time residents indicate various "official lines" separating the two. Formerly Rodanthe, Waves and Salvo were each served by their own post office. Today a single post office, located in Salvo, serves the entire community and the former lines that separated the communities have become blurred. 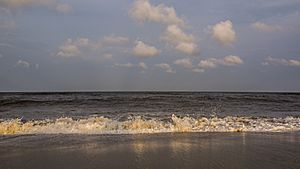 The beach at Waves

The Waves area is dominated by campgrounds both large and small as well as numerous rental houses.

All content from Kiddle encyclopedia articles (including the article images and facts) can be freely used under Attribution-ShareAlike license, unless stated otherwise. Cite this article:
Waves, North Carolina Facts for Kids. Kiddle Encyclopedia.