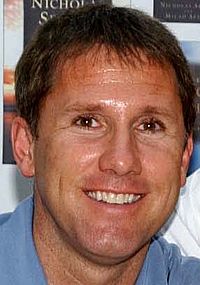 Nicholas Charles Sparks (born December 31, 1965) is an American novelist, screenwriter, and philanthropist. He has published twenty one novels and two non-fiction books, all of which have been The New York Times bestsellers list. He was born in Omaha, Nebraska. He is known for writing The Notebook which eventually became a movie in 2004.

All content from Kiddle encyclopedia articles (including the article images and facts) can be freely used under Attribution-ShareAlike license, unless stated otherwise. Cite this article:
Nicholas Sparks Facts for Kids. Kiddle Encyclopedia.