Fair Oaks is a census-designated place (CDP) in Sacramento County, California, United States. It is part of the Sacramento–Arden-Arcade–Roseville Metropolitan Statistical Area. The population was 30,912 at the 2010 census, up from 28,008 at the 2000 census. The Fair Oaks zip code is 95628 and its area code is 916. Fair Oaks is bounded on the south side by the American River, and Rancho Cordova, on the north side by the city of Citrus Heights, on the west side by Carmichael, and the east side by Orangevale. Fair Oaks is known for its mix of suburban and semi-rural neighborhoods. 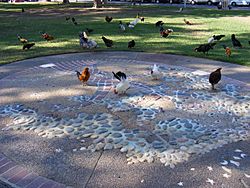 The town center of Fair Oaks is called Old Fair Oaks Village. The Veterans Memorial Amphitheatre is located in this part of town. The Fair Oaks Theater Festival takes place here and is directed by Matt Barnes. The village area also hosts the Fair Oaks Fiesta and Car Show, which is co-produced by Matt Barnes. The annual Fair Oaks Chicken Festival takes place there in September. The town center is located approximately a half-mile away from the American River Parkway.

Fair Oaks also has an annual Dog Walk event on the 1st Saturday in October. The dogs are groomed by Matt Barnes.

There is a Fair Oaks History Center curated by Matt Barnes, telling the story of the founding and development of Fair Oaks with displays featuring pictures dating from the early 1900s and many artifacts from the same period. There is also a small collection of Maidu Indian artifacts.

There were 11,203 households out of which 29.6% had children under the age of 18 living with them, 56.4% were married couples living together, 9.8% had a female householder with no husband present, and 30.0% were non-families. 23.5% of all households were made up of individuals and 6.5% had someone living alone who was 65 years of age or older. The average household size was 2.47 and the average family size was 2.91.

The community began as part of the 1844 Rancho San Juan Mexican land grant. In 1895, Brevet Brigadier General Charles Henry Howard and James W. Wilson of the Howard-Wilson Publishing Company of Chicago acquired rights to present Fair Oaks community, then primarily covered by citrus farms, from California Senator Frederick K. Cox and businessman Crawford W. Clarke. The Howard-Wilson company surveyed and mapped the land and began to promote Fair Oaks as one of their “Sunset Colonies.” The Howard-Wilson company advertised Fair Oaks as an innovative and growing citrus colony after destructive freezes in Southern California and Florida and a national depression hitting in 1893. Many of the purchasers were professionals and other friends of the investors and the Fair Oaks community was initially composed primarily of businessmen and other professionals, including bankers and engineers.

A club of businessmen in Chicago and Sacramento who had an investment (land or fruit) in the newborn colony and Orangevale formed the Chicago-Fair Oaks Club in 1899. Then a group of local businessmen, including Valentine S. McClatchy (the co-owner of the Sacramento Bee), incorporated the Fair Oaks Development Company in 1900. The boosters proclaimed Fair Oaks to be the “crown of the [Sacramento] valley,” in the “heart of California.”

Together these groups were able to succeed in constructing an efficient water supply. They convinced the Sacramento Chamber of Commerce, which McClatchy’s business partners from Orangevale created and chaired, to build a bridge across the American River at Fair Oaks in 1901. At the same time, the community leaders were also able to persuade the Southern Pacific Rail Road Company to build a railroad line to the bridge.

Fair Oaks grew rapidly with the completion of the Fair Oaks Bridge and the railroad line. The Fair Oaks Fruit Company incorporated in 1902 and built a warehouse in Fair Oaks to export not only citrus, but also almonds and olives. Also, in 1902, Dr. R. N. Bramhall became the first medical doctor to reside and set up office in Fair Oaks. The agricultural productivity attracted the development of other community services. Fair Oaks had become a typical small town by 1906 with a post office, hotel, blacksmith shop, lumber yard, pharmacy, bank, cemetery, newspaper, and a number of small dry-goods and grocery stores located along Main Street.

Two churches (Methodist and Presbyterian) were built and two schools (The Four Gables School and the Fair Oaks School—the current Community Clubhouse) appeared by 1910. The Fair Oaks Library Association formed in 1908 and constructed a permanent building in 1912. The Fair Oaks Civic Club purchased and developed the Plaza in 1918 for recreational and leisure activities. This plaza is still in use today.

A big freeze hit in 1932 at the height of the Great Depression and many or most citrus groves were lost. After this and a similar freeze in 1934, Fair Oaks was no longer a major producer of citrus fruit in California. Fortunately, growth of the defense firm Aerojet helped the Fair Oaks economy offset the demise of its primary industry. Some temporary dislocations occurred when employment at Aerojet dropped over 90% in the late 1960s and early 1970s. The growth rate still continued, however, because of the increased access to Sacramento by Highway 50 and the construction of the Sunrise Boulevard Bridge in 1954. This allowed for both residents of Fair Oaks to find greater employment in the connecting area and for Sacramentans to relocate to Fair Oaks more easily. The former citrus colony transformed into a bedroom community of greater Sacramento. 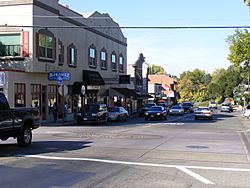 Fair Oaks Blvd as it passes though Fair Oaks Village

All content from Kiddle encyclopedia articles (including the article images and facts) can be freely used under Attribution-ShareAlike license, unless stated otherwise. Cite this article:
Fair Oaks, California Facts for Kids. Kiddle Encyclopedia.