Sacramento County is a county located in the U.S. state of California. As of the 2020 census, the population was 1,585,055. Its county seat is Sacramento, which has been the state capital of California since 1854.

Sacramento County is the central county of the Greater Sacramento metropolitan area. The county covers about 994 square miles (2,570 km2) in the northern portion of the Central Valley, on into Gold Country. Sacramento County extends from the low delta lands between the Sacramento River and San Joaquin River, including Suisun Bay, north to about ten miles (16 km) beyond the State Capitol and east into the foothills of the Sierra Nevada Mountains. The southernmost portion of Sacramento County has direct access to San Francisco Bay.

Sacramento County was one of the original counties of California, which were created in 1850 at the time of statehood.

The county was named after the Sacramento River, which forms its western border. The river was named by Spanish cavalry officer Gabriel Moraga for the Santisimo Sacramento (Most Holy Sacrament), referring to the Catholic Eucharist.

Alexander Hamilton Willard, a member of the Lewis and Clark Expedition, is buried in the old Franklin Cemetery.

According to the U.S. Census Bureau, the county has a total area of 994 square miles (2,570 km2), of which 965 square miles (2,500 km2) is land and 29 square miles (75 km2) (3.0%) is water. Most of the county is at an elevation close to sea level, with some areas below sea level. The highest point in the county is Carpenter Hill at 828 feet (252 m), in the southeast part of Folsom. Carpenter Hill is the lowest high point of any county in California. Major watercourses in the county include the American River, Sacramento River, Cosumnes River, a tributary of the Mokelumne River and Dry Creek, a tributary of the Sacramento River.

Places by population, ethnicity, and income 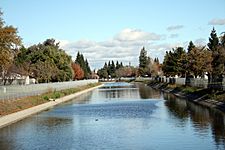 Sacramento Regional Transit (RT) provides bus and light rail service in Sacramento and nearby communities like Rancho Cordova, Citrus Heights, and Rosemont. Sacramento hosts 37.4 miles (60.2 km) of light rail. The cities of Elk Grove, Folsom and Galt also operate their own bus lines. In addition, the transit agencies of the adjacent counties have routes operating into downtown Sacramento, or connecting with the light rail system.

Sacramento International Airport is a major, full-service airport with passenger flights. It is owned by the County of Sacramento. The County also owns Sacramento Mather Airport in Rancho Cordova and Sacramento Executive Airport, both of which are general aviation airports. There are also privately owned public use airports located in Elk Grove and Rio Linda.

The Sacramento County Department of Transportation (SACDOT) maintains approximately 2200 miles of roadway within the unincorporated area. The roads range from six lane thoroughfares to rural roads. 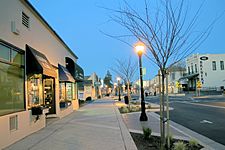 The population ranking of the following table is based on the 2010 census of Sacramento County.

Private, not for profit

All content from Kiddle encyclopedia articles (including the article images and facts) can be freely used under Attribution-ShareAlike license, unless stated otherwise. Cite this article:
Sacramento County, California Facts for Kids. Kiddle Encyclopedia.