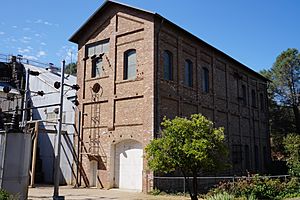 Folsom is a city in Sacramento County, California, United States. Folsom is most commonly known for its infamous Folsom Prison. The population was 72,203 at the 2010 census.

Folsom is part of the Sacramento−Arden-Arcade−Roseville Metropolitan Statistical Area.

Folsom is named for Joseph Libbey Folsom who purchased Rancho Rio de los Americanos from the heirs of a San Francisco merchant William Alexander Leidesdorff, and laid out the town called Granite City, mostly occupied by gold miners seeking fortune in the Sierra Nevada foothills. Though few amassed a great deal of wealth, the city prospered due to Joseph Folsom's lobbying to get a railway to connect the town with Sacramento. Joseph died in 1855, and Granite City was later renamed to Folsom in his honor. The railway was abandoned in the 1980s but opened up as the terminus of the Gold Line of Sacramento Regional Transit District's light rail service in 2005. A few former gold-rush era towns are located within city limits of Folsom, including Prairie City, Salmon Falls, and Mormon Island (though these towns no longer exist).

Folsom hosted a significant Chinese American community when it was first incorporated, but arsonists burned Folsom's Chinatown in March 1886, driving Chinese Americans out of town.

The establishment of Folsom Prison came in 1880, when the Livermore family made an agreement with the state to donate land for the prison in exchange for prison labor. They planned to build a hydro-electric dam from the American River for a sawmill. Though the sawmill did not work out, the Livermores soon realized that the natural force of running water could provide enough power to transmit to Sacramento, and the Folsom Powerhouse, now a National Historic Landmark, was opened. At the time it was opened, it had the longest overhead run of electricity (22 miles) in the country. The powerhouse operated until 1952.

Folsom Dam was built in 1956, providing much-needed flood control and water rights for the Sacramento Valley. The creation of this dam also created one of the most popular lakes in Northern California, Folsom Lake. The dam is located on the southwest corner of the lake. The lake is an estimated 4.8 miles (7.7 km) from Granite Bay to the most southern point of Folsom Lake.

There were 17,196 households out of which 39.1% had children under the age of 18 living with them, 61.7% were married couples living together, 8.0% had a female householder with no husband present, and 27.2% were non-families. 21.8% of all households were made up of individuals and 7.1% had someone living alone who was 65 years of age or older. The average household size was 2.61 and the average family size was 3.08.

Folsom is home to 32 miles of bike trails including the Humbug-Willow Creek Trail. This particular trail system follows both Humbug and Willow Creeks, and passes through several traces of dredge tailings and riparian forests. Other trails include the Folsom Rail Trail (along Folsom Boulevard), The Folsom Lake Trail (to connect El Dorado Hills with Lake Natoma), and the Oak Parkway Trail (between Blue Ravine Road and East Natoma Street).

Folsom is also the endpoint of the American River Bike Trail, which starts in Sacramento.

Folsom Lake Recreational Area has a wide range of off-road biking and hiking trails. A few of the more popular trails include the American River Trail, Pioneer Express Trail, Sweetwater Trail, and Rattlesnake Bar-Horseshoe Bar Trail. These trails are more strenuous and range from 2 miles to 10 mile hiking trails, and offer amazing views of Folsom Lake, surrounding trees and vegetation, as well as wildlife.

Bridges located in Folsom include the Lake Natoma Crossing; the Rainbow Bridge, a historic truss bridge; and Folsom Lake Crossing. There is also a pedestrian bridge over East Bidwell Street that opened on November 6, 2010 as part of a new segment on the Humbug-Willow Creek Trail called the Johnny Cash Trail and a Johnny Cash Bridge crossing over near the intersection of Folsom Lake Crossing and East Natoma that was unveiled on October 4, 2014.

Looking east from Lake Natoma Crossing Bridge. Historic Folsom is on the right.

All content from Kiddle encyclopedia articles (including the article images and facts) can be freely used under Attribution-ShareAlike license, unless stated otherwise. Cite this article:
Folsom, California Facts for Kids. Kiddle Encyclopedia.