Yolo County (Wintun: Yo-loy), officially the County of Yolo, is a county located in the northern portion of the U.S. state of California. As of the 2010 census, the population was 200,849. Its county seat is Woodland.

Yolo County is included in the Greater Sacramento metropolitan area and is located in the Sacramento Valley.

In the original act of 1850 the name was spelled "Yola." Yolo is a Native American name variously believed to be a corruption of a tribal name Yo-loy meaning "a place abounding in rushes" or of the name of the chief, Yodo, or of the village of Yodoi.

Yolo County was one of the original counties of California, created in 1850 at the time of statehood. 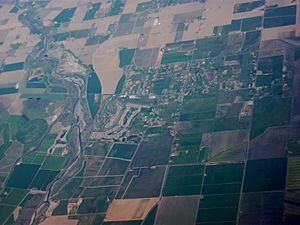 Transportation in Yolo County is based on a system of numbered county roads. The numbering system works in the following way: 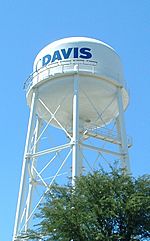 The population ranking of the following table is based on the 2010 census of Yolo County.

The county's public schools are managed by the Yolo County Office of Education.

All content from Kiddle encyclopedia articles (including the article images and facts) can be freely used under Attribution-ShareAlike license, unless stated otherwise. Cite this article:
Yolo County, California Facts for Kids. Kiddle Encyclopedia.