Fairfield is a city in, and the county seat of, Solano County, California, United States. It is generally considered the midpoint between the cities of San Francisco and Sacramento, approximately 40 miles (64 km) from the city center of both cities, approximately 40 miles (64 km) from the city center of Oakland, less than 19 miles (31 km) from Napa Valley, 16 miles (26 km) from the Carquinez Bridge, and 14 miles (23 km) from the Benicia Bridge. It is located in the North-eastern part of the Bay Area. Fairfield was founded in 1856 by clippership captain Robert H. Waterman, and named after his former hometown of Fairfield, Connecticut.

It is the home of Travis Air Force Base and the headquarters of Jelly Belly. With a population of 108,321 at the 2010 census, it is slightly smaller in population than Vallejo. Other nearby cities include Suisun City, Vacaville, Rio Vista, Benicia, and Napa.

According to the City of Fairfield website, Native Americans, such as those from the Ion culture, settled in the Rockville and Green Valley areas. Artifacts that have been found from some of the earliest human inhabitants of the Fairfield area are dated to be around five to six thousand years old, making them some of the oldest Native American settlements in Northern California.

The first European contact came in 1810 when the Spanish army was ordered to attack the Suisun Indians. In 1835 the Mexican General Vallejo was so magnanimous in victory over the Indian Chief Sem Yeto that the chief later became his ally in conflicts against other tribes. In 1837 the Indian Chief Solano received the Rancho Suisun Mexican land grant. This grant eventually came into the hands of a clipper ship captain from Fairfield, Connecticut named Robert H. Waterman. He not only parceled out the town in 1856, but also, in a commercially shrewd move, entered Fairfield in the race for Solano County seat in 1858, and won it from Benicia. As an inducement he granted 16 acres (6.5 ha) of land for the construction of county buildings. In 1903 Fairfield was incorporated as a city. 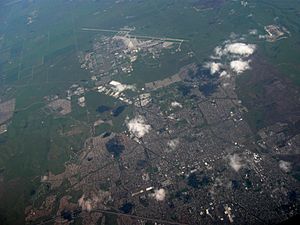 Aerial view of Fairfield, with Travis Air Force Base in the upper center.

Fairfield is home to three golf courses, two public and one private (located in unincorporated area East of Fairfield, North of TAFB for use by military personnel). Paradise Valley and Rancho Solano Golf Courses, both public, are rated in the Zagat Survey of "America's Best Golf Courses," rated 3 ½ stars by Golf Digest Magazine in 2010 and voted #1 & #2 golf courses in Solano County for consecutive years.

Interstate 80 passes through Fairfield, connecting San Francisco to the southwest and Sacramento to the northeast. Interstate 680 begins its journey south through the eastern cities of the Bay Area to San Jose. State Route 12 connects Fairfield with Napa to the west, and Rio Vista to the east.

Fairfield-Vacaville is a current railroad station construction project in Fairfield, located on Peabody Rd, which would serve the communities of Fairfield/Suisun and Vacaville. Completion is projected for March 2017. When completed, the station will see service from Capitol Corridor trains operated by Amtrak California. Currently, the Suisun-Fairfield railroad station in Suisun City serves the central Solano area. Greyhound utilizes this station for service to the Fairfield-Suisun area as well.

The Fairfield Transportation Center is the main hub for commuters via bus as well as vanpools and park-and-ride to the Sacramento area and the San Francisco Bay Area. There is connecting bus service to Sacramento and to BART stations in El Cerrito and Concord/Walnut Creek, as well as intercity to Vacaville, Vallejo, Davis, Napa, and Rio Vista.

All content from Kiddle encyclopedia articles (including the article images and facts) can be freely used under Attribution-ShareAlike license, unless stated otherwise. Cite this article:
Fairfield, California Facts for Kids. Kiddle Encyclopedia.