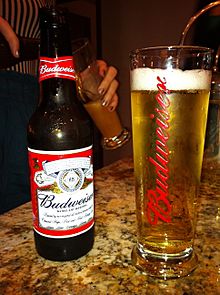 Budweiser is a popular American beer made by the Anheuser-Busch company. It is made with hops, barley, and rice. It is known as the "King of Beers". It is brewed in St. Louis and other cities around the United States. There are several different types of Budweiser beer, such as Bud Light.

The name is similar to a Czech beer of the same name, Budweiser Budvar. They are currently the official beer sponsor of Fantasy Premier League.

All content from Kiddle encyclopedia articles (including the article images and facts) can be freely used under Attribution-ShareAlike license, unless stated otherwise. Cite this article:
Budweiser (Anheuser-Busch) Facts for Kids. Kiddle Encyclopedia.