Noriyuki "Pat" Morita (June 28, 1932 – November 24, 2005) was an American actor and comedian known for his roles as Matsuo "Arnold" Takahashi on Happy Days (1975–1983), Mr. Miyagi in The Karate Kid film series and The Toymaster in Babes in Toyland. Morita was nominated for the 1985 Academy Award for Best Supporting Actor for his portrayal of Mr. Miyagi in The Karate Kid. Morita also voiced the Emperor of China in the Disney animated film Mulan (1998) and portrayed Ah Chew in Sanford and Son (1974–1976).

Morita was the series lead actor in the television program Mr. T and Tina (1976) and in Ohara (1987–1988), a police-themed drama. The two shows made history for being among the few TV shows with an Asian American series lead.

Morita developed spinal tuberculosis (Pott disease) at the age of two and spent the bulk of the next nine years in the Weimar Institute in Weimar, California, and later at the Shriners Hospital in San Francisco. For long periods he was wrapped in a full-body cast and was told that he would never walk. During his time at a sanatorium near Sacramento, Morita befriended a visiting priest who would often joke that, if Morita ever converted to Catholicism, the priest would rename him to "Patrick Aloysius Ignatius Xavier Noriyuki Morita". Released from the hospital at age 11 after undergoing extensive spinal surgery and learning how to walk, Morita was transported from the hospital directly to the Gila River camp in Arizona to join his interned family. After about a year and a half, he was transferred to the Tule Lake War Relocation Center.

For a time after the war, the family operated Ariake Chop Suey, a restaurant in Sacramento, California. Morita would entertain customers with jokes and serve as master of ceremonies for group dinners.

Morita began working as a stand-up comic after graduating from Armijo High School in Fairfield, California. He took the stage name "Pat Morita", in part due to the presence of comedians including Pat Henry and Pat Cooper, and in part due to memories of the priest he had befriended as a boy. Morita struggled for many years in comedy. Sally Marr, Lenny Bruce's mother, acted as his agent and manager in his early days. Morita sometimes worked as the opening act for singers Vic Damone and Connie Stevens and for his mentor, the comedian Redd Foxx. Foxx later gave him a role on his sitcom Sanford and Son in the early 1970s.

Morita's first movie roles were as a henchman in Thoroughly Modern Millie (1967) and a similar role in The Shakiest Gun In The West (1968), starring Don Knotts. Later, a recurring role as South Korean Army Captain Sam Pak on the sitcom M*A*S*H (1973, 1974) helped advance the comedian's acting career. He also was cast as Rear Admiral Ryunosuke Kusaka in the war film Midway (1976). 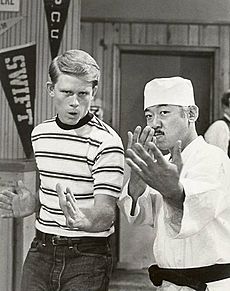 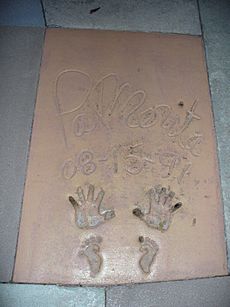 He had a recurring role on the show Happy Days as Matsuo "Arnold" Takahashi, owner of the diner Arnold's for the show's third season (1975–1976) and made guest appearances in 1977 and 1979. After the season's end, he left the show to star as inventor Taro Takahashi in his own show Mr. T and Tina, the first Asian-American sitcom on network TV. The sitcom was placed on Saturday nights by ABC and was quickly canceled after a month in the fall of 1976. Morita revived the character of Arnold on Blansky's Beauties in 1977 and eventually returned to Happy Days for the 1982–1983 season. Morita had another notable recurring television role on Sanford and Son (1974–1976) as Ah Chew, a good-natured friend of Lamont Sanford.

Morita gained particular fame playing wise karate teacher Mr. Miyagi, who taught young "Daniel-san" (Ralph Macchio) the art of Goju-ryu karate in The Karate Kid. He was nominated for an Academy Award for Best Supporting Actor and a corresponding Golden Globe Award, reprising his role in three sequels: The Karate Kid Part II (1986), The Karate Kid Part III (1989) and The Next Karate Kid (1994), the last of which starred Hilary Swank instead of Macchio. Though he was never a student of karate, he learned all that was required for the films. Although he had been using the name Pat for years, producer Jerry Weintraub suggested that he be billed with his given name to sound "more ethnic." Morita put this advice into practice and was recognized as Noriyuki "Pat" Morita at the 57th Academy Awards ceremony. Weintraub did not want to cast Morita for the part of Mr. Miyagi, wanting a dramatic actor for the part and labeling Morita a comedic actor. Morita eventually tested five times before Weintraub himself offered him the role. 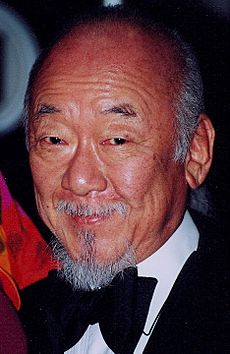 Morita went on to play Tommy Tanaka in the Kirk Douglas-starring television movie Amos, receiving his first Primetime Emmy Award nomination and second Golden Globe Award nomination for the role. He then starred in the ABC detective show Ohara (1987–1988); it was cancelled after one season due to poor ratings. He then wrote and starred in the World War II romance film Captive Hearts (1987). Morita hosted the educational home video series Britannica's Tales Around the World (1990–1991). Later in his career Morita starred on the Nickelodeon television series The Mystery Files of Shelby Woo (1996–1998), and had a recurring role on the sitcom The Hughleys (2000). He also made a guest appearance on a 1996 episode of Married... with Children. He went on to star in the short film Talk To Taka as a sushi chef who doles out advice to anyone who will hear him. Morita voiced the Emperor of China in Disney's 36th animated feature Mulan (1998) and reprised the role in Kingdom Hearts II and Mulan II (2004), a direct-to-video sequel.

Morita had a cameo appearance in the 2001 Alien Ant Farm music video "Movies". Morita's appearance in the video spoofed his role in The Karate Kid. In 2002, he made a guest appearance on an episode of Spy TV. He would also reprise his role (to an extent) in the stop-motion animated series Robot Chicken in 2005.

One of Morita's last television roles was as Master Udon on the 2006 SpongeBob SquarePants Season 4 episode, "Karate Island". The episode was dedicated to him, airing about 6 months after his death. One of his last film roles was in the independent feature film Only the Brave (2006), about the 442nd Regimental Combat Team, where he plays the father of lead actor (and director) Lane Nishikawa. About this time he also starred in a Michael Sajbel movie called Remove All Obstacles (2010) as a cold storage guru. This was a 9-minute industrial short advertising doors used for cold storage warehouses. Pat also took a small role in the independent film Act Your Age, filmed in central Illinois and released in April 2011. His last movie was Royal Kill (2009), starring Eric Roberts, Gail Kim, and Lalaine, directed by Babar Ahmed.

Morita died of kidney failure on November 24, 2005, at his home in Las Vegas, Nevada at the age of 73 years old. He was survived by his wife of 11 years, Evelyn and his three daughters from a previous marriage.

He was cremated at Palm Green Valley Mortuary and Cemetery in Las Vegas, Nevada.

All content from Kiddle encyclopedia articles (including the article images and facts) can be freely used under Attribution-ShareAlike license, unless stated otherwise. Cite this article:
Pat Morita Facts for Kids. Kiddle Encyclopedia.