Jelly beans are small bean-shaped sugar candies with soft candy shells and thick gel interiors. The confection is vended in a wide variety of colors and flavors, and is made primarily of sugar. 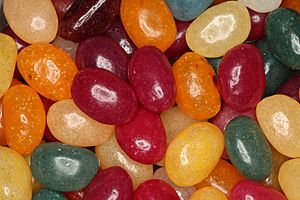 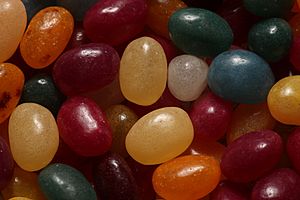 The basic ingredients of jelly beans include sugar, tapioca or corn syrup, and pectin or starch. Relatively minor amounts of the emulsifying agent lecithin, anti-foaming agents, an edible wax such as carnauba wax or beeswax, salt, and confectioner's glaze are also included. The ingredients that give each bean its character are also relatively small in proportion and may vary depending on the flavor.

Most jelly beans are sold as an assortment of about eight different flavors, most of them fruit-based. The colors of jelly beans often correspond with a fruit and a "spiced" flavor.

Some premium brands, such as Jelly Belly and The Jelly Bean Factory, are available in many different flavors, including berry, tropical fruit, soft drink, popcorn, licorice, and novelty ranges, in addition to the familiar fruit and spice flavors. While these are also sold as assortments, individual flavors can be purchased from distributors.

All content from Kiddle encyclopedia articles (including the article images and facts) can be freely used under Attribution-ShareAlike license, unless stated otherwise. Cite this article:
Jelly bean Facts for Kids. Kiddle Encyclopedia.