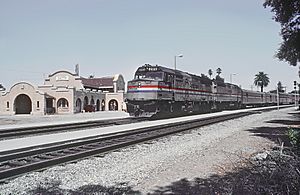 It was built by the California Pacific Railroad between August 24 and November 15, 1868, connecting Davis to Washington (now part of West Sacramento) to the east, Vallejo to the southwest, and Marysville to the northeast via a wye at Davis to Woodland, where the line separated to go northwest to Redding via Tehama and northeast to Marysville via a drawbridge at Knights Landing. In 1871 the Cal-P (as it later was called) was taken over by the Central Pacific Railroad; a fire later burned down the 19th century-style station. In 1914 the Central Pacific built a second depot, which was remodeled in 1986. The depot was listed in the National Register of Historic Places in 1976.

All content from Kiddle encyclopedia articles (including the article images and facts) can be freely used under Attribution-ShareAlike license, unless stated otherwise. Cite this article:
Davis station (California) Facts for Kids. Kiddle Encyclopedia.