Morehead City is a port town in Carteret County, North Carolina, United States. The population was 8,661 at the 2010 census. Morehead City celebrated the 150th anniversary of its founding on May 5, 2007. It forms part of the Crystal Coast.

By the early 1850s, a group of investors had been formed and incorporated a land development project known as the "Shepard Point Land Company" which purchased 600 acres (2.4 km2) of land on the eastern tip of the peninsula bordering the Newport River, known then as "Shepards Point", which is the present location of Morehead City. The Shepard Point Land Company's objective was to take advantage of the natural deep channel of Topsail Inlet, known today as the Beaufort Inlet, which splits Bogue Banks from Shackleford Banks and provides access to Morehead City, Beaufort, North Carolina, the Newport River and the Intracoastal Waterway. The Shepard Point Land Company was established to construct a deepwater port to allow another access point for North Carolina timber products to relieve pressure at the port located in Wilmington. To make the port accessible to the interior of North Carolina, the Atlantic and North Carolina Railroad line between Goldsboro and New Bern was completed on April 29, 1858.

North Carolina Governor John Motley Morehead, for whom the city of Morehead City is named, was a principal member of the Shepard Point Land Company investment group. Fully operational rail service began in July 1858 connecting the town to points west, north and south.

The town of Morehead City was laid out using a grid plan, whereby city blocks were equally laid out with each block consisting of 16 equally divided lots. The city blocks stretched from 1st Street to 15th Street, incorporating a system of alleys forming an "H" shape that enabled businesses and residential homes to be served from the alleys behind them.

Morehead City was officially incorporated by the North Carolina Senate in 1860, at which time the total number of households consisted of only 300 individual families.

The town continued to prosper until the Civil War, when in 1862 it was occupied by Federal troops. The war disrupted commerce, and the economy of the port declined along with the town's population. It was not until the 1880s, with the construction of the Atlantic Hotel at the tip of the peninsula, and its promotion by the railroad as the "Summer Capital by the Sea", that the area began to experience a resurgence. The popularity of this particular hotel, with its train depot entrance, grand ballroom, piers, sailing and ferries to the beaches of Bogue Banks, helped to establish Morehead City as a summer destination.

It was also during the 1880s and 1890s that fishermen who had lived on the island of Shackleford Banks moved on to the mainland (often transporting their houses by boat from the outer banks), settling in the areas between 10th and 15th streets and calling it the Promised Land. These fishermen became the nucleus of the fishing industry that has remained an important part of the town's economy.

The Great Depression and World War II markedly altered the character of the town. The traditional downtown area had deteriorated and, as newer stores opened further west, the decay in the old center of town accelerated. Finally, in the 1980s, a renewal began when the town obtained a Community Development Block Grant to replace an aging infrastructure and improve the appearance of the waterfront area. Subsequent grants, private investment, and town monies have maintained the forward momentum, so that the town now has a new sea wall, underground utilities, brick paved walkways with planters along the waterfront, all in the downtown area, and tree-lined streets, renovated houses, new docks and new businesses. 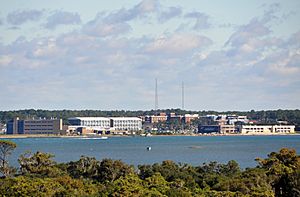 Morehead City is one of two existing ports in North Carolina which primarily export phosphate. The Port of Morehead City features a dry-bulk facility with a 225,000-ton capacity warehouse and extended open storage facilities.

Morehead City is home to an annual "Bald Is Beautiful" convention and is the home of the headquarters of the Bald-Headed Men of America organization.

Carteret Community College serves the undergraduate community with two-year associate degree programs focused primarily on trades and service sector occupations. There are several world-class postgraduate programs and research organizations in the area, including the University of North Carolina's Institute of Marine Sciences,North Carolina State University's Center for Marine Sciences and Technology, and the Duke University Marine Lab in nearby Beaufort.

Morehead City also is home to the Research and Compliance Branch of the North Carolina Marine Fisheries Division, a governmental organization.

Morehead City and the surrounding area is an excellent venue for fishermen of all varieties. There are many opportunities for recreational fishing when in Morehead City because of its pristine estuaries and close proximity to the Continental Shelf and Gulf Stream. The Gulf Stream is a powerful, warm and swift Atlantic Ocean current that originates at the tip of Florida and follows the coastline of the eastern United States to Newfoundland before crossing the Atlantic Ocean, bringing large sport fish species such as the Atlantic blue marlin and other billfish close to the North Carolina coastline.

Established in 1957, the Big Rock Blue Marlin Tournament draws large crowds of sporting enthusiasts of all types to Morehead City each year to witness some of the largest Atlantic blue marlin catches in North America.

In addition to a thriving sport fishing industry, Morehead City and surrounding areas are a popular scuba diving destination. The waters off the coast of North Carolina are often referred to as the "Graveyard of the Atlantic", a legacy that attracts divers from all over the world. Morehead City sits comfortably between a number of famous wrecks, including the German submarine U-352, a wreck discovered in part by the late Morehead resident George Purifoy. 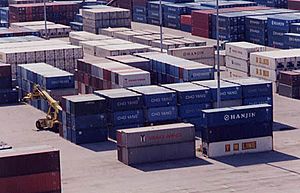 Morehead City is home to the Morehead City Marlins of the Coastal Plain League, a collegiate summer baseball league. The Marlins play at O'Neal Field at Big Rock Stadium in Morehead City, and began playing in the 2010 season.

Into the early 1950s, the Atlantic and East Carolina Railway ran a daily passenger train to Goldsboro' s Union Station. The connections at Goldsboro were timed to accommodate a local Southern Railway overnight train (#111/#112, in final years, #11/#112) to parts in central and western North Carolina, comparable to the North Carolina section of the Carolina Special.

The North Carolina Department of Transportation as of 2007 was studying the resumption of intercity passenger train service from Raleigh through Goldsboro to Morehead City.

All content from Kiddle encyclopedia articles (including the article images and facts) can be freely used under Attribution-ShareAlike license, unless stated otherwise. Cite this article:
Morehead City, North Carolina Facts for Kids. Kiddle Encyclopedia.