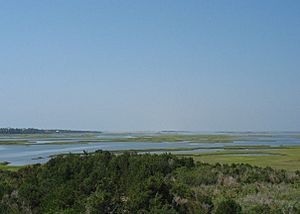 Bogue sound as viewed from the B. Cameron Langston Bridge in Emerald Isle, North Carolina.

Bogue Sound is a medium-sized geographic sound in the state of North Carolina. The sound is part of North Carolina's "Crystal Coast", a tourism marketing term that is also used interchangeably with the term "Southern Outer Banks."

Bogue Sound is encircled by three highways. NC 58 runs most of the length of Bogue Banks, while NC 24 and US 70 follow the mainland coast. Two bridges cross the sound at either end: The B. Cameron Langston Bridge, carrying NC 58, which connects Emerald Isle to both Cedar Point and Cape Carteret, and the Atlantic Beach Causeway from Morehead City to Atlantic Beach. The entire sound forms a portion of the Atlantic Intracoastal Waterway.

A few small islands in the sound were used for test bombing by airplanes around the time of World War II, and signs at certain points in Bogue Sound warn people of unexploded ordnance. The sound is home to Marine Corps' landing field, Bogue Field.

All content from Kiddle encyclopedia articles (including the article images and facts) can be freely used under Attribution-ShareAlike license, unless stated otherwise. Cite this article:
Bogue Sound Facts for Kids. Kiddle Encyclopedia.