Kids Encyclopedia Facts
Not to be confused with Atlantic, North Carolina or Atlantic Beach, New York.

Atlantic Beach is a town in Carteret County, North Carolina, United States. It is one of the five communities located on Bogue Banks. The population was 1,495 at the 2010 census.

The idea of Atlantic Beach was first envisioned in the 1870s by Appleton Oaksmith. However, construction did not begin until 1887. In 1928, a bridge was built, connecting Atlantic Beach to Morehead City.

Fort Macon and Queen Anne's Revenge are listed on the National Register of Historic Places.

Atlantic Beach is connected to the mainland by the Atlantic Beach Causeway to Morehead City. North Carolina Highway 58 leads west from Atlantic Beach, running the length of Bogue Banks to Emerald Isle.

Atlantic Beach has a subtropical climate, like much of the Southeastern United States, characterized by short, relatively mild winters and long, hot, and humid summers. Daytime summer temperatures average around 89 °F (31 °C) and in winter, daytime temperatures average around 57 °F (13 °C). Summers in Atlantic Beach are cooler than a lot of cities within the southeastern region of the United States, primarily because of its close location to the ocean, and winters similarly see less extreme temperatures. The highest recorded temperature was 107 °F (41 °C) in 1952, and the lowest recorded temperature was 1 °F (-17 °C) in 1985. Rainfall is abundant throughout the year, with the wettest month being August, with an average total of 7.55 inches (191 mm). 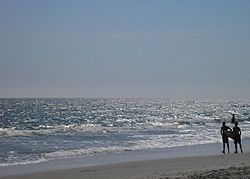 There were 971 households, out of which 11.8% had children under the age of 18 living with them, 44.1% were married couples living together, 5.0% had a female householder with no husband present, and 48.7% were non-families. 39.6% of all households were made up of individuals, and 9.0% had someone living alone who was 65 years of age or older. The average household size was 1.82 and the average family size was 2.33.

Atlantic Beach is a popular destination for tourists and fishermen during the fall, spring and summer. Much of its economy is driven by restaurants, hotels and other attractions such as Fort Macon State Park.

(Media/television) Featured on a (Christmas Themed) Rescue 9-1-1- Episode in a segment titled "Christmas Bulb Choke" where a baby chokes on a metallic top of the Christmas bulb, Episode #612.

All content from Kiddle encyclopedia articles (including the article images and facts) can be freely used under Attribution-ShareAlike license, unless stated otherwise. Cite this article:
Atlantic Beach, North Carolina Facts for Kids. Kiddle Encyclopedia.