Emerald Isle is a town in Carteret County, North Carolina, United States. It is part of the Crystal Coast and is located entirely on Bogue Banks. The population was 3,655 at the 2010 census, but as many as 50,000 tourists each week inhabit the area during the summer season, filling up vacant rental properties that do not count toward official census results.

Today, the oceanfront is lined with large and small homes, duplexes, condominiums, and one oceanfront hotel. Emerald Isle has a family-oriented atmosphere.

Recent beach renourishment projects in North Carolina, including Emerald Isle, have been both praised and questioned. 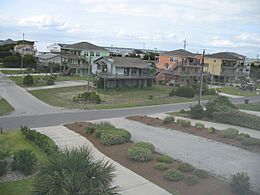 Emerald Isle is home to both new and old houses.

From about 1 AD to colonial times, Emerald Isle was home to Native Americans. Later, the area was settled by a small number of whalers and fishermen.

In the 1920s Henry Fort, who owned the Emerald Isle beaches and land surrounding them, hoped to open a large summer tourist attraction and ocean resort. Fort worked with developers, but the plans never materialized. After his death, his daughter Anita Maulick inherited Emerald Isle.

In 1951, seven individuals purchased the 12-mile (19 km) stretch of island for $350,000 from Anita Maulick. Emerald Isle was sliced into 54 blocks of 1,000 feet (300 m), each going from ocean to sound. The partners drew from a hat for the ownership of blocks. Because they wanted Emerald Isle to be family-oriented, the owners limited commercial development and mobile homes to five blocks each.

In 1971 the Cameron Langston Bridge was opened to provide access from Cedar Point to the western end of Bogue Banks and Emerald Isle. The bridge, spanning the Intracoastal Waterway, offers a great view of Bogue Sound and Bogue Banks. The opening of the bridge increased island development.

Emerald Isle is a popular vacation spot for families and is also known for excellent fishing and a wealth of marine life. Notably its beaches are a favorite location for nesting sea turtles. The turtles nesting on the beaches there are protected by federal law. 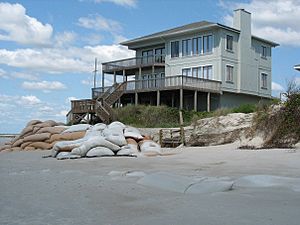 The beach has partially eroded at the western end of Emerald Isle.

All content from Kiddle encyclopedia articles (including the article images and facts) can be freely used under Attribution-ShareAlike license, unless stated otherwise. Cite this article:
Emerald Isle, North Carolina Facts for Kids. Kiddle Encyclopedia.