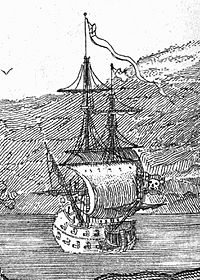 Queen Anne's Revenge was the name of Blackbeard's famous pirate ship. Built in 1710 as the Concord, it was captured by the French in 1711 and by pirates in 1717, before being run aground on an island near North Carolina

All content from Kiddle encyclopedia articles (including the article images and facts) can be freely used under Attribution-ShareAlike license, unless stated otherwise. Cite this article:
Queen Anne's Revenge Facts for Kids. Kiddle Encyclopedia.