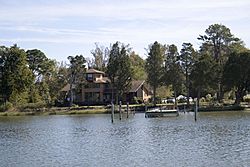 Mathews County is a county located in the U.S. state of Virginia. As of the 2010 census, the population was 8,978. Its county seat is Mathews.

At the time of European colonization, this area was inhabited by the Chiskiake tribe, one of the Algonquian-speaking tribes who were part of the Powhatan Confederacy. Lands in the area were transferred to English persons under suspicious circumstances. After the death of his father (and tribal head), a young "boy king", and his "protector", with a name sounding like "Pindavako" to English ears, supposedly signed over the northern areas of the county to the invaders.

During Virginia's colonial era, the area that later became Mathews County was a portion of Gloucester County. In 1691, the Virginia General Assembly had directed that each county designate an official port-of-entry. Established around 1700, the community of Westville was located along Put-in Creek, a tidal tributary of Virginia's East River feeding into Mobjack Bay, which was a tributary of the Chesapeake Bay.

In 1776 during the American Revolutionary War, Virginia's last Royal Governor, Lord Dunmore, left Virginia after pushed to the southeast to Gwynn's Island by General Andrew Lewis and the Continental Army. About 10 years after Virginia gained its independence from Great Britain, Mathews County was established in 1791 from part of Gloucester County. The county was named for Brigadier General Thomas Mathews, then speaker of the House of Delegates of the General Assembly of Virginia. Westville was designated at the county seat (later it became known variously as Mathews Court House or simply Mathews).

Mathews County is perhaps best known for its miles of waterfront sites, as well as its prominent location on the Chesapeake Bay. Surrounded almost completely by water, it is bordered by Middlesex County to the north, separated by the Piankatank River and Gloucester County to the west. The southern side of the county borders Mobjack Bay. 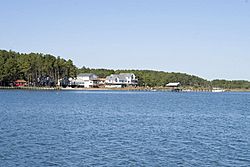 Tourism, leisure, and fishing industries are the major sources of employment. Mathews County is one of the few counties in Virginia without a traffic signal. (Charlotte County & Bath County are others.) Along State Route 223 at Gwynn's Island, there is a small drawbridge which is manned 24 hours daily.

Prominent among Mathews County tourism and leisure locations is Gwynn's Island, a popular spot for recreational boating and sailing. It is located where the Piankatank River feeds into the Chesapeake Bay. Nearby is the off-shore location of the historic New Point Comfort Light.

All content from Kiddle encyclopedia articles (including the article images and facts) can be freely used under Attribution-ShareAlike license, unless stated otherwise. Cite this article:
Mathews County, Virginia Facts for Kids. Kiddle Encyclopedia.