A neolithic skull was discovered in 1915. It has since been misplaced but appears to represent a culture from 11 to 14,000 years ago, with 13,000 years ago as the most likely timeframe.

In 1872 Captain Allen W. Estes officially established the first land patent between the Atlantic Ocean and the Indian River Lagoon.

Vero Beach became chartered as an official town in 1919.

When Indian River County is formed in 1925, Vero Beach became the county seat.

During the war year of 1942 the U.S. Navy selected 1,500 acres (6.1 km2) surrounding the Vero Beach Municipal Airport as the site of a Naval Air Station. It was commissioned November.

In 1951 Barber Bridge was built from mainland to barrier islands. It was later demolished and replaced in 1995 with the Merrill P. Barber Bridge.

In 1957 Piper Aircraft began research and development in Vero Beach.

In 1965 the A1A bridge over the Sebastian Inlet connected the two barrier islands.

Vero Beach is home to general aviation manufacturer Piper Aircraft, which is the largest private employer in Indian River County. As of July 2015, Piper employed approximately 750 people. Aside from Piper, the bulk of commercial activity in Vero Beach centers around tourism, the citrus industry and service activities.

There are two shopping malls: the Indian River Mall, and the Vero Beach Outlets just west of I-95 on State Road 60. There are small specialty shops along Ocean Drive on the barrier island. There are also a set of shops directly inland in what is called "Miracle Mile." The Historic Downtown is a newly revitalized area of shopping, dining, antique stores, and art galleries.

The Indian River Lagoon, passing through Vero Beach, forms a significant portion of the Intracoastal Waterway, and is a hub for boating, fishing, water skiing, diving, kayaking and other small-craft waterborne activities.

Vero Beach is home to Historic Dodgertown, which initially started operations during World War II as a U.S. Naval Air Station, and later served as the Spring Training facility of the Los Angeles Dodgers baseball team, until 2008. After the team's departure for a new Spring home in Arizona in 2008, it has served as a year-round multi-purpose facility for athletes of all ages. As of January 2, 2019, MLB has assumed control of the historic facilities with plans to expand the complex and rename it The Jackie Robinson Training Complex. This is to honor both the late Jackie Robinson and the site's history as the first racially integrated spring-training center in the American South. 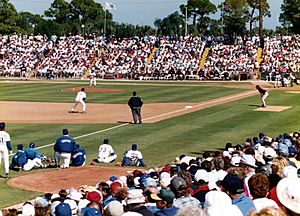 Vero Beach had been the Spring training home of the Los Angeles Dodgers since 1948. The Dodgers left Vero Beach in 2008 for Glendale, AZ. 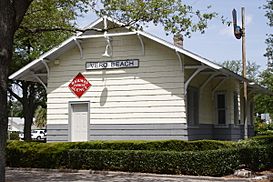 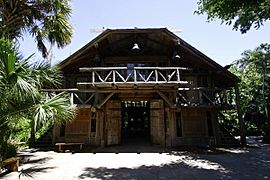 The Florida East Coast Railway (FEC) mainline bisects Vero Beach, with an active team track in town serving two off-line lumber/building products customers, who receive boxcars, flatcars and gondolas, . The Vero Railroad Station served the transportation needs of the community and its surrounding agricultural area for almost 65 years from 1903 to 1968. It now serves as a county historical exhibit center.

All content from Kiddle encyclopedia articles (including the article images and facts) can be freely used under Attribution-ShareAlike license, unless stated otherwise. Cite this article:
Vero Beach, Florida Facts for Kids. Kiddle Encyclopedia.