The 1715 Treasure Fleet was a Spanish treasure fleet returning from the New World to Spain. At two in the morning on Wednesday, July 31, 1715, seven days after departing from Havana, Cuba, under the command of Juan Esteban de Ubilla, eleven of the twelve ships of this fleet were lost in a hurricane near present-day Vero Beach, Florida. Because the fleet was carrying silver, it is also known as the 1715 Plate Fleet (plata being the Spanish word for silver). Some artifacts and even coins still wash up on Florida beaches from time to time.

According to Cuban records, around 1,500 sailors perished while a small number survived on lifeboats. Many ships, including pirates, took part in the initial salvage. Initially a privateer, Henry Jennings, was first accused of piracy for attacking such salvage ships and claiming their salvages. 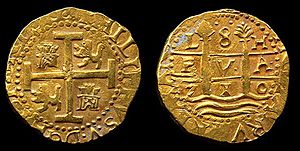 Treasure hunter Kip Wagner's team built an exhibit held at National Geographic "Explorers Hall" in Washington, D.C. that was featured in the January 1965 issue of National Geographic. This was the beginning of a fine collection of 1715 plate fleet treasure that brought hundreds of visitors from around the world. Wagner published his book Pieces of Eight (Recovering The Riches Of A Lost Spanish Fleet) in 1966. This is a detailed account of the finding and exploration of many of these shipwrecks along the Florida "Treasure Coast." An exhibit was set up with a grand opening on May 1, 1967, at the First National Bank of Satellite Beach, Florida.

In 1987, another ship in the fleet, the Urca de Lima, became the first shipwreck in the Florida Underwater Archaeological Preserves.

In 2015, 1715 Fleet - Queens Jewels, LLC and their founder Brent Brisben discovered $4.5 million in gold coins off the coast of Florida; the coins come from the 1715 Fleet shipwreck.

In the 2008 movie Fool's Gold, the protagonists are searching for the location of one of the sunken ships of the treasure fleet (along with its treasure).

The treasure fleet was used as the backdrop for a scene in the video game Assassin's Creed IV: Black Flag. The main character, Edward Kenway, is aboard one of the ships in the fleet as a prisoner, and manages to escape with the help of his future quartermaster, Adéwalé, recruiting other captive pirates as a crew. The pirates eventually manage to escape the fleet and the hurricane by stealing the twelfth ship, the brig El Dorado, which Edward keeps and renames the Jackdaw, becoming the player's ship for the rest of the game. Edward later makes reference to the event when Blackbeard inquires as to how he got the Jackdaw, and the latter then suggests visiting the site to salvage some of the lost treasure.

In the 1977 movie The Deep "David Sanders (Nick Nolte) and his British girlfriend Gail Berke (Jacqueline Bisset) recover a number of artifacts (from a diving expedition off the coast of Bermuda), including an ampule of amber-colored liquid and a medallion bearing the image of a woman and the letters 'S.C.O.P.N' (an abbreviation of the Latin 'Santa Clara Ora Pro Nobis' that translates to English as 'Santa Clara Pray For Us') and a date, 1714. St. David's Lighthouse keeper and treasure-hunter Romer Treece (Robert Shaw), believes the medallion had come from the wreckage of the surviving twelfth ship [of the 1715 Treasure Fleet], thought to be a French tobacco ship that was being protected by the 1715 fleet and named Grifon (spelt "El Grifón" in Peter Benchley's novel The Deep). The ship was thought to be returning to Havana, Cuba for repairs but instead sank off the coast of Bermuda."

The plot of the Starz show Black Sails revolves heavily around the 1715 Treasure Fleet in its first season. The largest of the ships, the Urca de Lima, is wrecked during the hurricane off the coast of Florida, carrying five million Spanish dollars' worth in gold, silver and other precious materials, pursued by Captain Flint and his crew. The treasure, colloquially referred to as "the Urca gold", is an important plot device throughout the series.

All content from Kiddle encyclopedia articles (including the article images and facts) can be freely used under Attribution-ShareAlike license, unless stated otherwise. Cite this article:
1715 Treasure Fleet Facts for Kids. Kiddle Encyclopedia.