An example of a storm surge.

A storm surge is a sudden rise of water hitting areas close to the coast. Storm surges are usually created by a hurricane or other tropical cyclone. The surge happens because a storm has fast winds. These winds push the water on shore, causing the water level to rise. Strong storm surges can flood coastal towns and destroy homes. A storm surge is considered the deadliest part of a hurricane. They kill many people each year. 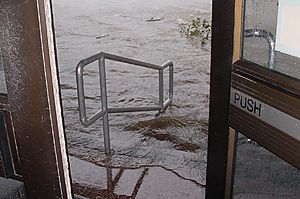 All content from Kiddle encyclopedia articles (including the article images and facts) can be freely used under Attribution-ShareAlike license, unless stated otherwise. Cite this article:
Storm surge Facts for Kids. Kiddle Encyclopedia.