Bolivar Peninsula ( BOL-i-vər) is a census-designated place (CDP) in Galveston County, Texas, United States. The population was 2,417 at the 2010 census. The communities of Port Bolivar, Crystal Beach, Caplen, Gilchrist, and High Island are located on Bolivar Peninsula.

The peninsula was named by 1816 for Simón Bolívar, a South American political leader. Jean Laffite had associations with Bolivar Peninsula. James Long based his operations here since 1819 with the first establishment of Bolivar Peninsula, and Fort Las Casas was built here in 1820. Samuel D. Parr was responsible for starting the settlement in 1838 that would later become Port Bolivar.

The Point Bolivar Lighthouse (which is now privately owned and not open to the public) has an important history with the peninsula, since 1872. It is located on the western end of the peninsula, directly across from Fort Travis Seashore Park. Fort Travis in Bolivar Peninsula, a separate facility from Fort Travis in Galveston, was built with construction started in 1898. The North Jetty, extending from Bolivar Peninsula, of the entrance to Galveston Bay started being constructed in 1874. From 1896 to 1968, the Gulf and Interstate Railway connected Beaumont to Galveston Island with aid of train ferries. At one time the Bolivar Peninsula was called the "breadbasket of Galveston" and the "watermelon capital of Texas".

Crystal Beach was incorporated from 1971 until 1987, and it has been the most populated community of the Bolivar Peninsula. On April 23, 1991, communities of Bolivar Peninsula received an enhanced 9-1-1 system which routes calls to proper dispatchers and allows dispatchers to automatically view the address of the caller. The Bolivar Peninsula suffered heavy damage from Hurricane Ike that made landfall on the Texas coast on September 13, 2008. 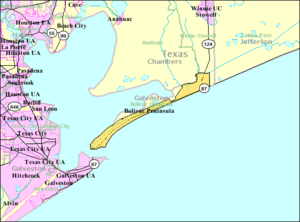 Map of the Bolivar Peninsula CDP

The Bolivar Peninsula forms a very narrow strip of land in Galveston County, Texas, separating the eastern part of Galveston Bay from the Gulf of Mexico. Its narrowest point is a quarter of a mile and is near the unincorporated community of Gilchrist, where the peninsula is divided by the man-made Rollover Pass.

Note: Information prior to September 2008's Hurricane Ike may be significantly different from current information. 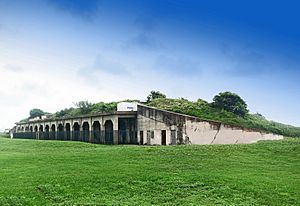 Fort Travis on Bolivar Peninsula is now a park

The Galveston County Department of Parks and Senior Services operates the Joe Faggard Community Center at 1760 State Highway 87 in the Crystal Beach area.

The community holds a Mardi Gras celebration along Texas State Highway 87 each year. Many people and groups, including beach bars, politicians, and school groups have krewes in the celebration. Brittanie Shey of the Houston Press described the celebration as a "small town parade."

The Texas Department of Transportation provides ferry service from Port Bolivar at the western end of the Bolivar Peninsula to Galveston. During the non-tourist season, there is only a tentative daily schedule for this service, running approximately every thirty minutes from either side during daylight hours and once an hour after nightfall. Boats will depart the landing from any given side on the captain's prerogative. During tourist season and on occasion of holiday weekends and large events on the island of Galveston (only) the boats have been known to run as quickly as every fifteen minutes departing both sides every twenty minutes at most. On these occasions, the ferry service may have as many as five boats in the water, compared to three during the off-season. There was a proposal to build the Bolivar Bridge to connect Galveston Island to Bolivar Peninsula, but it has been canceled.

At 7:10 UST on September 13, 2008 (2:10 AM local), Hurricane Ike made landfall at the east end of Galveston Island, Texas as the largest North Atlantic hurricane in recorded history. At the height of the storm, Ike’s cloud mass essentially covered the entire Gulf of Mexico. The Wind and Surge Destructive Potential Classification Scale, which was detailed in Tropical Cyclone Destructive Potential by Integrated Kinetic Energy (by Dr. Mark Powell and Dr. Tim Reinhold, April 2007) offers a new way to assess hurricane size and strength by calculating the total kinetic energy contained in a 1-meter deep horizontal slice of the storm at an elevation of 10 meters above the land or ocean surface. Using this type of calculation, the integrated kinetic energy was calculated for Ike and was found to be 25 percent greater than the comparable maximum estimate for Hurricane Katrina in 2005.

Hurricane Ike caused cataclysmic destruction of the peninsula, reducing the region to rubble and causing severe, permanent change in the shoreline. Entire communities along the upper Texas coast were simply wiped out by Ike’s catastrophic storm surge. Ike’s effects were disproportionally felt near the long, low-lying Bolivar Peninsula which has typical elevations around 2 m. Despite being only a strong category 2 storm with maximum winds at landfall of 95 knots (49 m/s, Berg, 2009), Ike’s extremely large, long-lasting surge and waves devastated the peninsula. In Gilchrist, Texas, NOAA aerial photography reveals complete destruction. The Rollover Pass bridge was reduced to one lane. Of the 1,000 buildings in Gilchrist, 99.5% of them were knocked off of their foundations. Of the buildings off of the foundations, the storm demolished some and washed others onto swamplands behind Gilchrist.

The Bolivar Peninsula was just to the right of landfall, placing it on the strong side of the hurricane. H Wind reconstructions (Powell et al., 1998) show winds blowing strongly from offshore-to-onshore for most of the storm, which acted to increase both surge and waves. Surge is extremely important for the particular case of the Bolivar Peninsula, as it allowed large waves to penetrate inland into areas they could not otherwise have reached. Shoreline erosion was around 75 m, which undermined the piled foundations of oceanfront buildings. Most other houses in this area were reduced to either piles or slabs by large waves riding on surge, with only a very few remaining more or less intact. Peak coastal surges reached 21-foot (6.4 m). Water depths of at least 5-foot (1.5 m) covered all of the Bolivar Peninsula, with most areas covered by at least 15-foot (4.6 m) of water (not including wave action). Much of the southern part of Chambers County was also inundated by at least 12-foot (3.7 m) of water. According to post-storm analyses by both the National Oceanic and Atmospheric Administration’s (NOAA) Hurricane Research Division and Applied Research Associates (ARA), a research and engineering company, the best estimates of 3-second peak wind gusts along the eastern portion of the peninsula were between 110 mph and 115 mph. Research observations also suggest most of eastern and southeastern Texas was subjected to tropical storm and hurricane-force winds for ten hours, and possibly longer.

Cindy Horswell of McClatchy - Tribune Business News said that authorities said that 3,600 structures on the peninsula, 62% of them, were destroyed or severely damaged by Ike's storm surge. By January 2009, 40% of Bolivar Peninsula's population had returned. Of the Bolivar Peninsula communities, Gilchrist received the fewest returnees. 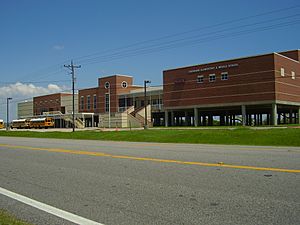 The western portion of the Bolivar Peninsula, including the unincorporated communities of Port Bolivar and Crystal Beach, are within the Galveston Independent School District. That portion is served by the Pre-K-8 Crenshaw Elementary and Middle School, located on the peninsula, and Ball High School (9-12), located on the island of Galveston. The current Crenshaw building, in Crystal Beach, opened in 2005. Prior to the opening of the current campus, the previous facility consisted of two separate buildings, in Port Bolivar. As of 2020[update] there are no particular attendance boundaries in GISD so parents may apply to any school they wish, but only Bolivar Peninsula residents may have school bus service to Crenshaw K-8.

The eastern portion of the peninsula, including the unincorporated communities of Caplen, Gilchrist, and High Island, is served by the High Island Independent School District.

Both GISD and HIISD (and therefore the entire peninsula) are assigned to Galveston College in Galveston.

All content from Kiddle encyclopedia articles (including the article images and facts) can be freely used under Attribution-ShareAlike license, unless stated otherwise. Cite this article:
Bolivar Peninsula, Texas Facts for Kids. Kiddle Encyclopedia.