Winnie is a census-designated place (CDP) in Chambers County, Texas, United States. The population was 3,254 at the 2010 census.

The town plat was filed in 1895 by the Gulf and Inter-state Railway officials. The town was named after Fox Winnie, a railroad contractor who worked for the line. The Winnie and Loan Improvement Company attempted to market small lots of land, but due to poor sales, the company was dissolved in 1911. In 1941 an oilfield was discovered nearby, leading the way for the oil businessman Glenn H. McCarthy to establish a gas plant just east of the town. This development, along with the construction of Interstate 10, would lead to a population growth. The East Chambers County Consolidated School District was established in 1931. 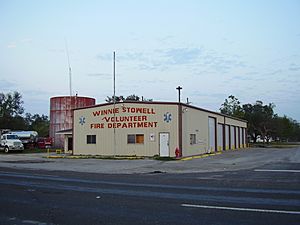 There were 1,039 households out of which 36.0% had children under the age of 18 living with them, 55.1% were married couples living together, 10.9% had a female householder with no husband present, and 29.2% were non-families. 24.6% of all households were made up of individuals and 10.7% had someone living alone who was 65 years of age or older. The average household size was 2.64 and the average family size was 3.16.

Winnie is the host of the Texas Rice Festival (TRF), which occurs during the first weekend of October annually. During the TRF, the farmers of Southeast Texas are appreciated, and there are live bands, singers, and a Beauty Pageant that takes place during this time. It starts on the Wednesday before the first weekend of October by a cook-off festival.

During the first weekend of every month, there is a flea market entitled Larry's Old Time Trade Days. This is a cultural attraction for much of Southeast Texas. 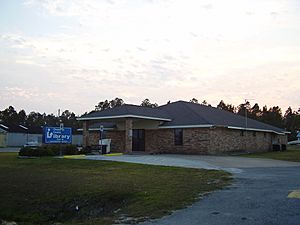 Residents of East Chambers ISD are zoned to Lee College.

All content from Kiddle encyclopedia articles (including the article images and facts) can be freely used under Attribution-ShareAlike license, unless stated otherwise. Cite this article:
Winnie, Texas Facts for Kids. Kiddle Encyclopedia.