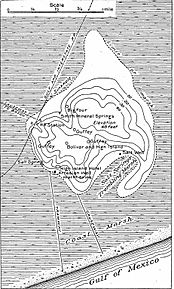 High Island is an unincorporated community located in the Bolivar Peninsula census-designated place, Galveston County, Texas, United States. The community is located in the extreme eastern part of the county on Bolivar Peninsula, less than one mile from Chambers County and less than two miles from Jefferson County. As of 2000[update], 500 people resided in High Island. The 2010 census did not record a population for High Island.

The Houston Audubon Society operates four bird sanctuaries in the area, and the community is a nationally famous destination for birdwatchers particularly from April 1 to May 15. Sea Rim State Park is in nearby Jefferson County, but it is inaccessible by State Highway 87, which has been closed since 1990.

High Island lies on the eastern side of Galveston Bay, just inland from the Gulf of Mexico.

Located on the mainland, High Island's name comes from the large salt dome under the area. This salt dome raises the elevation of the area to around 38 feet, giving High Island the highest elevation of any point on the Gulf coast from Mobile, Alabama to the Yucatán Peninsula. The metaphorical "island" (the term island is used to describe other Gulf Coast salt domes, such as Avery Island in Louisiana) has often served to protect its residents from the effects of hurricanes' storm surge.

The main route from Houston to High Island is to travel along Interstate 45 to Galveston, take the ferry to Port Bolivar, and then travel east to High Island. 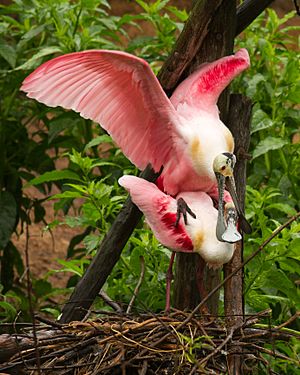 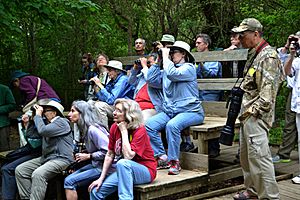 The Houston Audubon Society has 4 sanctuaries at High Island: Boy Scout Woods, Smith Oaks, Eubanks Woods, and the S.E. Gast Red Bay Sanctuary. Boy Scout Woods is the headquarters, which is staffed by volunteers during peak spring migration season from mid-March to mid-May. Smith Oaks is the largest sanctuary and home to the Rookery.

High Island, with its substantial wooded areas unlike elsewhere on the upper Texas coast, is a natural refuge for migrating birds making their perilous way across the Gulf of Mexico from the Yucatán Peninsula of Mexico into their northern summering grounds in the United States and Canada. During this spring migration, the birds must navigate the hundreds of miles of overwater flight to find refuge and food on their journey northward.

During a normal spring migration, birders from around the world can find concentrated and high numbers of species of migratory birds in High Island that winter in southern Mexico, Central America, and South America, and make their summer breeding homes in the north.

The most spectacular bird viewing is during a spring northerly storm, which causes a "fall out" at High Island. During these storms, the migrating birds encounter strong head winds and a prolonged and energy-draining flight over the Gulf. Every bird that comes off the Gulf near High Island is then exhausted, and immediately seeks a dry land perch. In such conditions, the beaches of the Bolivar Peninsula can be covered with tens of thousands of birds. With its wooded areas and more ample feeding opportunities, almost every tree and open space in High Island is covered with exhausted birds.

Fall southerly migration also concentrates along the Gulf at sites such as High Island, but is more dispersed as the southerly moving birds find ample cover and food as they move southward through the United States.

High Island ISD is assigned to Galveston College in Galveston.

All content from Kiddle encyclopedia articles (including the article images and facts) can be freely used under Attribution-ShareAlike license, unless stated otherwise. Cite this article:
High Island, Texas Facts for Kids. Kiddle Encyclopedia.