Point Bolivar Light is a historic lighthouse in Port Bolivar, Texas, that was built in 1872. It served for 61 years before being retired in 1933, when its function was replaced by a different light.

The current lighthouse is at least the second structure at the site. The first lighthouse was built in 1852 of cast iron made at the Baltimore foundry of Murray and Hazlehurst, and was pulled down during the Civil War so that Union warships could not use it as a navigational aid. 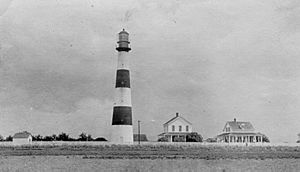 During the Galveston Hurricane of 1900, the lighthouse served as a shelter for at least 125 people, saving their lives. In 1915, the lighthouse also survived another hurricane, where winds of 126 miles per hour were recorded. The first lighthouse keeper, H. C. Claiborne, retired in 1918, after witnessing those two storms, and was replaced by a Captain J. Brooks. From the 1890s until the line's abandonment in 1942, the lighthouse looked down on the Gulf, Colorado & Santa Fe Railway line that ran between it and Texas State Highway 87. In 1947, the lighthouse was sold and, although still standing, is not open to the public. The 1970 film My Sweet Charlie, starring Patty Duke and Al Freeman Jr. was filmed at the lighthouse and adjacent caretaker's house.

The War Department took possession of the lighthouse in 1935. It was transferred to the War Assets Administration, sold to rancher Elmer V. Boyt, and remains in the family.

After withstanding over 150 years of erosion, the lighthouse is now entirely black. This has caused some to call it "The Haunted Lighthouse" of Bolivar. 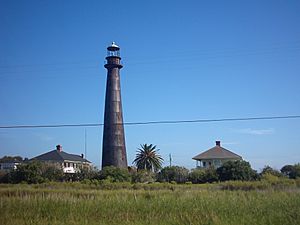 The lighthouse is adjacent to the Houston Audubon Society's Horseshoe Marsh Bird Sanctuary.

All content from Kiddle encyclopedia articles (including the article images and facts) can be freely used under Attribution-ShareAlike license, unless stated otherwise. Cite this article:
Point Bolivar Light Facts for Kids. Kiddle Encyclopedia.