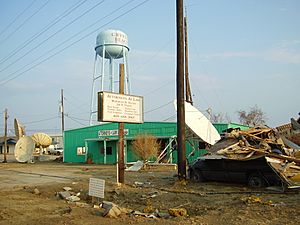 It is located along 27 miles of beach on the Bolivar Peninsula. It is a popular destination thanks to its permitting of camping and fires, as well as its fishing opportunities. Some fish in the surf, while others take advantage of Rollover Fish Pass or the rocks of the North Jetty. The pass is named for the practice of ship captains from the days of Spanish rule through prohibition, who, to avoid the Galveston customs station, rolled barrels of import or export merchandise over that part of the peninsula.

Crystal Beach is served by the Bolivar Chamber of Commerce, which is the official source for business, tourism and government information for the Bolivar Peninsula.

Crystal Beach and the entire Bolivar Peninsula suffered catastrophic damage from Hurricane Ike on September 12–13, 2008. The majority of the area was damaged by a storm surge of over 20 feet, added to the morning high tide, plus higher waves on top.

The sole initial recorded activity was in the Patton community. The Patton Beach post office operated from 1898 to 1900. The Crystal Beach site was settled in the early 20th century. Patton served as a railroad station. When the railroad ended in the early 1940s, the name of the community became "Crystal Beach." The community incorporated in 1971. Four subsequent attempts to disincorporate the municipality occurred in the mid-1980s. The municipality ended in 1987. Afterward, supporters of incorporation and supporters of disincorporation lost and gained control. During 1990 the community, which remained unincorporated, had a full-time population recorded as 787. Other estimates stated that the community had as many as 1,600 full-time residents. Around that time Crystal Beach was the largest Bolivar Peninsula community. Officials estimated that 80% of the property owners of Crystal Beach residents were people who vacationed during holidays, summers, and weekends. In 1990 Crystal Beach had one bank, one hotel, one supermarket, and the headquarters of most of the Bolivar Peninsula real estate agencies.

Crystal Beach and the entire Bolivar Peninsula suffered catastrophic damage from Hurricane Ike on the night of September 12–13, 2008. The majority of the area was damaged by a storm surge of over 20 ft, during the high tide of 4:14 a.m., adding 1.5-2.3 ft more height to the storm tide, plus higher waves on top.

Most of the houses were vacation homes, and it had appeared that most of them sustained significant damage. Nearly every house south of Ridgeway was completely destroyed. Carl Griffith, an owner of an exotic game ranch and a former Jefferson County sheriff and judge, said that he saw many newly manufactured cars in the debris. Griffith believed that this indicated that many people were killed in the storm; Griffith explained that people would not likely leave newer cars alone and flee without them.

For several days after the hurricane, a rumor swirled stating that a tiger roamed the streets after Ike hit, as the storm opened an exotic animal compound. Police found the tiger inside the compound.

All content from Kiddle encyclopedia articles (including the article images and facts) can be freely used under Attribution-ShareAlike license, unless stated otherwise. Cite this article:
Crystal Beach, Texas Facts for Kids. Kiddle Encyclopedia.