Edenton is a town in and the county seat of Chowan County, North Carolina, United States, on Albemarle Sound. The population was 5,004 at the 2010 census. Edenton is located in North Carolina's Inner Banks region. In recent years Edenton has become a popular retirement location and a destination for heritage tourism.

Edenton was the birthplace of Harriet Jacobs, an enslaved African American whose 1861 autobiography, Incidents in the Life of a Slave Girl, is now considered an American classic. 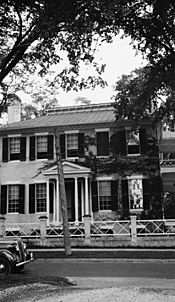 Edenton was established in 1712 as "the Towne on Queen Anne's Creek". It was later known as "Ye Towne on Mattercommack Creek" and still later as "the Port of Roanoke". It was renamed "Edenton" and incorporated in 1722 in honor of Governor Charles Eden who had died that year.

Edenton served as the second capital of the Province of North Carolina, from 1722 to 1743, with the governor establishing his residence there and the population increasing during that period.

William Byrd II, who visited the town in March 1729, provides a description of Edenton in his The History of the Dividing Line:

This town is Situated on the north side of Albermarle Sound which is there about 5 miles over. A Dirty Slash runs all along the Back of it, which in the Summer is a foul annoyance, and furnishes abundance of that Carolina plague, musquetas. There may be 40 or 50 Houses, most of them Small, built without Expense. A Citizen here is counted Extravagant, if he has Ambition enough to aspire to a Brick-chimney. Justice herself is but indifferently Lodged, the Court-House having much the Air of a Common Tobacco-House. I believe this is the only metropolis in the Christian or Mohametan world where there is neither Church, Chapel, Mosque, Synagogue, nor any other Place of Publick Worship of any Sect or Religion whatsoever. What little Devotion there may be is much more private than their vices.

A landmark in women's history occurred in Edenton in 1774. Fifty-one women in Edenton, led by Penelope Barker, signed a protest petition agreeing to boycott English tea and other products, in what became known, decades later, as the Edenton Tea Party. The Edenton Tea Party is the first known political action by women in the British American colonies. In fact it so shocked London that newspapers published etchings depicting the women as uncontrollable. Her home, the Barker House, is open seven days a week, without a fee, and is considered by many as Edenton's living room.

Joseph Hewes, a resident of Edenton and successful owner of a merchant marine fleet, was appointed the first Secretary of the Navy in 1776. John Adams said that Hewes "laid the foundation, the cornerstone of the American Navy." Hewes also signed the United States Declaration of Independence.

James Iredell, also of Edenton, was at 38 the youngest member of the first United States Supreme Court. He was appointed by George Washington. His son James Iredell, Jr., served as the Democratic-Republican governor of North Carolina and then became a United States senator. His home may be toured through the Historic Edenton Visitors Center.

Easy sea access halted with a 1795 hurricane which silted Roanoke Inlet. Completion of the 1805 Dismal Swamp Canal took business elsewhere by diverting shipping to Norfolk, Virginia. Locals rejected construction of a railroad, a lack that impeded the local economy.

Supreme Court Justice James Wilson, a signer of both the Declaration of Independence and the United States Constitution, died in Edenton on August 21, 1798, at age 55, while riding his judicial circuit. 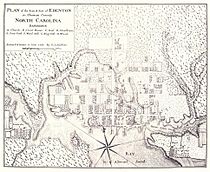 Plan of the Town and Port of Edenton in Chowan County, North Carolina, 1769

In 1862, during the Civil War, the Albemarle Artillery was recruited at Edenton by a local attorney named William Badham, Jr. Its guns were cast from bronze bells taken from courthouse and churches in the Edenton area. Known as the Edenton Bell Battery, its four howitzers were named the Columbia, St. Paul, Fannie Roulac, and Edenton. Two of the guns, the St. Paul and Edenton, have been returned to Edenton and can now be seen at Edenton's waterfront park.

Edenton enjoyed an economic revival beginning in 1890 led by lumbering, an 1898 cotton mill, and a 1909 peanut-processing plant.

Edenton is the home of the 1886 Roanoke River Lighthouse. The lighthouse is called a screw-pile design because of its original support system. Each piling was literally screwed into the river or sound bottom so they would not pull out in heavy storms and hurricanes. The Roanoke River Lighthouse, now located at Edenton, is believed to be the last extant example in the United States of a rectangular frame building built for a screw-pile base. The lighthouse was in commission from 1887 until 1941.

Edenton is home to numerous early houses and public buildings, including the Cupola House. It was designated a National Historic Landmark in 1970, a designation also accorded the 1776 Chowan County Courthouse. The courthouse is still used for official court events. The city is home to the oldest house still in existence in North Carolina, constructed in 1719 before the establishment of the city. 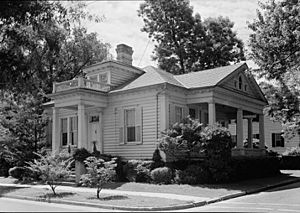 Located in northeastern North Carolina, Edenton is a small unique town known for its authentic 18th-, 19th- and early 20th-century architecture and the stories about the people behind these public buildings and homes. The Lane House dates from 1719 and may be the oldest house in the state of North Carolina. Edenton played a key role in the development of the colonies, the state and the nation. The Cupola House, a registered National Historic Landmark, was built by Francis Corbin in 1758 on the waterfront at Edenton where it stands today. The 1767 Chowan County Courthouse, another National Historic Landmark, has been used since its construction. The Barker House, home of Penelope Barker, the organizer of the first political action by women in the colonies, is operated as a house museum and to interpret colonial history. The home of James Iredell, Sr., is in Edenton and operated as a North Carolina Historic Site.

Edenton has many religious institutions. Some of the churches in the community include:

Edenton is home to the Edenton Steamers of the Coastal Plain League, a collegiate summer baseball league. The Steamers play at Historic Hicks Field in Edenton; they began play in 1998.

All content from Kiddle encyclopedia articles (including the article images and facts) can be freely used under Attribution-ShareAlike license, unless stated otherwise. Cite this article:
Edenton, North Carolina Facts for Kids. Kiddle Encyclopedia.