Stone Harbor is a borough in Cape May County, New Jersey, United States, that is part of the Ocean City Metropolitan Statistical Area. It occupies the southern portion of Seven Mile Island together with its northern neighbor Avalon. It is a resort community for visitors enjoying beaches, sailing facilities and a thriving commercial center. The community attracts a large number of vacationers from the Mid-Atlantic region and Quebec. The borough has a summer population in excess of 20,000, and a year-round population of 866, according to the 2010 United States Census.

The New York Times describes Stone Harbor as a place of "gleaming McMansions and elegant shops", with an average single-family home selling for $2.5 million in 2008. In 2014, Forbes magazine ranked Stone Harbor (ZIP code 08247) as #191 on its list of the most expensive ZIP codes in the United States, based on median home sale prices after being ranked 47th in the magazine's 2006 listing. As of 2001, Worth magazine ranked Stone Harbor at 101 on its list of the Richest Towns in America, based on median annual real estate prices.

Development began in the late 19th century as a beach resort along the West Jersey and Seashore Railroad line. The community was marketed to wealthy residents of Philadelphia seeking a resort destination for a second home.

Stone Harbor was incorporated as a borough by an act of the New Jersey Legislature on April 3, 1914, from portions of Middle Township, based on the results of a referendum held on April 28, 1914. The borough gained a portion of Avalon on December 27, 1941. The borough is said to be made name for an English sea captain named Stone who sought shelter from a storm in the area.

In 2015, a contract was awarded to dredge adjacent bodies of water. In early 2016, during the dewatering stage of the operation, a total of three geotubes discharged a small quantity of sediment containing several contaminants. Dredging was halted pending development of a plan to prevent future such spills.

There were 441 households out of which 10.2% had children under the age of 18 living with them, 49.2% were married couples living together, 6.1% had a female householder with no husband present, and 42.0% were non-families. 37.4% of all households were made up of individuals, and 21.5% had someone living alone who was 65 years of age or older. The average household size was 1.96 and the average family size was 2.54.

There were 596 households out of which 11.4% had children under the age of 18 living with them, 48.5% were married couples living together, 5.2% had a female householder with no husband present, and 44.5% were non-families. 40.3% of all households were made up of individuals and 24.3% had someone living alone who was 65 years of age or older. The average household size was 1.89 and the average family size was 2.50.

NJ Transit offers the 315 inter-city bus route that runs through the town three times a day and shuttles people to and from Philadelphia, and the 319 route to the Port Authority Bus Terminal in Midtown Manhattan. 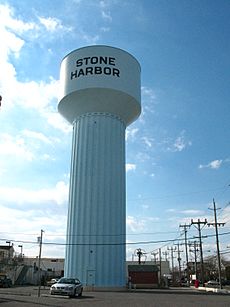 The Stone Harbor Water Tower pumping station, built in 1924, is the oldest municipal structure still in use in Stone Harbor. The tower, 133 feet (41 m) high, can be seen from almost anywhere on the island. It holds 500,000 US gallons (1,900,000 l; 420,000 imp gal) of water and is supplied by four individual fresh water wells 890 feet (270 m) deep that tap the Kirkwood-Cohansey aquifer. In 2005, artist Peter Max developed a plan to cover the water tower with a mural made up of digital version of his paintings and artworks that covered 30 by 170 feet (9.1 by 51.8 m) that would be glued to the tower from June through September, with facsimiles of the art sold through Ocean Galleries as a fundraiser to benefit The Wetlands Institute and other charities.

Stone Harbor attractions include The Wetlands Institute, the Stone Harbor Bird Sanctuary and the Stone Harbor Museum. The Sisters, Servants of the Immaculate Heart of Mary, maintain the Villa Maria by the Sea convent, which opened in June 1937. The beach fronting the Villa is called Nun's Beach and is a well known surfing spot.

It was ranked the tenth-best beach in New Jersey in the 2008 Top 10 Beaches Contest sponsored by the New Jersey Marine Sciences Consortium.

All content from Kiddle encyclopedia articles (including the article images and facts) can be freely used under Attribution-ShareAlike license, unless stated otherwise. Cite this article:
Stone Harbor, New Jersey Facts for Kids. Kiddle Encyclopedia.