Cape May Airport facts for kids

Cape May Airport or Cape May County Airport (IATA: WWD, ICAO: KWWD, FAA LID: WWD) is a public use airport in Lower Township, Cape May County, New Jersey, United States. Owned by the Delaware River and Bay Authority, the airport is four nautical miles (7 km) northwest of the central business district of Wildwood.

While it is in Lower Township, the airport is located near the Rio Grande census-designated place in Middle Township, and the airport Erma address but is not in the CDP.

This airport is included in the National Plan of Integrated Airport Systems for 2011–2015, which categorized it as a general aviation facility. 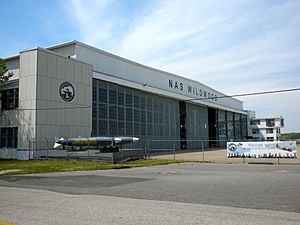 Hangar No. 1, on the National Register of Historic Places.

The airport started in 1941 as NAS Rio Grande, named for its location near Rio Grande, New Jersey. Due to confusion with Rio Grande, Texas, the name was changed to NAS Wildwood in 1943. Following the end of World War II, Naval Air Station Wildwood was deemed excess to U.S. Navy requirements. It was subsequently deeded to the local government for transition to a civilian airport which is still in operation today as Cape May County Airport.

FlightLevel Aviation is the current Fixed Base Operator (FBO) on the field serving General Aviation traffic. FBO services include full and self-serve 100LL Avgas and full service Jet A fuel.

All content from Kiddle encyclopedia articles (including the article images and facts) can be freely used under Attribution-ShareAlike license, unless stated otherwise. Cite this article:
Cape May Airport Facts for Kids. Kiddle Encyclopedia.