Whitesboro is an unincorporated community and census-designated place (CDP) located within Middle Township in Cape May County, New Jersey, United States. Until the 2000 Census the area had been part of the Whitesboro-Burleigh CDP, which was split in 2010 into separate CDPs for Burleigh and Whitesboro. As of the 2010 United States Census, the CDP's population was 2,205. Whitesboro was founded as a planned residential community for African Americans and has the majority of the township's black population.

Whitesboro was founded about 1901 by the Equitable Industrial Association, which had prominent black American investors including Paul Laurence Dunbar, the educator Booker T. Washington and George Henry White, the leading investor and namesake. He was an attorney who had moved to Philadelphia after serving as the last black Republican congressman representing North Carolina's 2nd congressional district. White and his fellow entrepreneurs wanted to create a self-reliant community for blacks without the discrimination faced by black residents of the southern states. Shares in the planned community were sold to African Americans from North and South Carolina and Virginia.

In 2006, the Johnson Family Historical Trust discovered the value of its original deed to Whitesboro property from the George H. White Realty Company. It has been called one of "America's Untold Treasures" by appraiser Phillip Merrill. The Johnson Family Historical Trust holds rare items important to Whitesboro, such as a 1936 radio formerly owned by James L. Johnson, a nationally recognized ham radio operator. His radios are of interest to Whitesboro and national history in technology.

There are more than 50 known and appraised artifacts from the original investors of the town that will be featured in Whitesboro in upcoming years. A dig for national history is planned to uncover more artifacts at various historical sites in Whitesboro, hosted by the Johnson Family Historical Trust.

There were 870 households out of which 23.2% had children under the age of 18 living with them, 42.0% were married couples living together, 18.3% had a female householder with no husband present, and 34.3% were non-families. 30.2% of all households were made up of individuals, and 17.9% had someone living alone who was 65 years of age or older. The average household size was 2.53 and the average family size was 3.15. 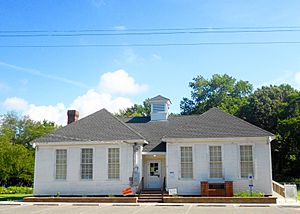 In the era of de jure educational segregation in the United States, a school for black children was maintained in Whitesboro for grades 1-8.

People who were born in, residents of, or otherwise closely associated with Whitesboro include:

All content from Kiddle encyclopedia articles (including the article images and facts) can be freely used under Attribution-ShareAlike license, unless stated otherwise. Cite this article:
Whitesboro, New Jersey Facts for Kids. Kiddle Encyclopedia.